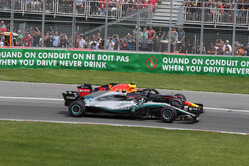 Valtteri finished the Canadian Grand Prix in P2 - his fourth podium finish at the Circuit Gilles Villeneuve and fourth second place of the 2018 season. Lewis came home in P5 - his 32nd consecutive finish in the points. Today's result marks the 20th podium finish in Canada for Mercedes-Benz power.

Valtteri Bottas: We tried everything we could, but I don't think we had a chance to really fight for the win today. I had an exciting start to the race, when I was defending second place as hard as I could. I was on the outside in Turn 1, trying to carry a lot of speed to be on the inside line for Turn 2. I went wheel to wheel with Max, we fought hard, but it was all fair and I was just happy that I managed to stay ahead of him. After that I was trying to put pressure on Sebastian, but didn't have enough pace. The Ferrari was controlling the race and we just weren't quick enough today. I backed off late in the race to save some fuel which is why Max got so close. We were the only top team that didn't bring a new engine for this race, everyone else had an improved power unit. Hopefully the introduction of our new engine in France will help us in the fight with Ferrari and Red Bull.

Lewis Hamilton: It was a tough day in the office today, but I'm just very grateful that I finished today's race and score some points. From the start I was down on power and my engine was overheating. I couldn't get the temperatures down, so I just thought it was going to fail. Every single lap I was waiting for the power to just drop away and disappear - but it kept going. I could have lost a lot more points today; fifth is not the strongest result, but it could have been a lot worse. Ferrari have been doing a slightly better job and brought a better package, but we are very close. The guys are working really hard, but each and every one of us can always do better and improve. We will just keep our heads down, keep pushing and stay positive.

Toto Wolff: This has been a tricky weekend for us, with Ferrari showing they had the quickest car in qualifying and in the race. We came to Montreal expecting to perform strongly and today's result is a further lesson to us that the historic patterns of performance between the teams are not holding true this year. It is very hard to see a trend from circuit to circuit, and the race results are being decided by tight margins - which team makes the fewest mistakes, develops its chassis and power unit most effectively, finds the right balance between performance and reliability, and puts together their race weekend cleanly from Friday onwards. Today, the fastest laps table showed three teams within 0.15s and this is the new reality of 2018. Looking at today's race, Valtteri got a good start then defended extremely well from Verstappen in the first two corners. We never had the pace to challenge Sebastian - but that move was the basis for his P2 finish. After this, he raced hard, hardly put a foot wrong but we didn't have the pace for any more today. On Lewis' side, we had an issue with a chassis component that compromised his cooling from the opening lap. That meant the engine was running hot and we had to manage temperatures, costing performance, in the opening stint. We were able to open up the bodywork at the pit-stop to improve the situation, but also lost a place to Ricciardo that we were unable to get back during the next 50 laps. It has been a tough weekend for us - tougher than we expected - and this result is a wake-up call for everybody in the team. We now need to reflect in the right way, understand where we can find more performance and respond in Paul Ricard in two weeks' time.

Andrew Shovlin: We came here to win so to leave with a second and fifth falls a long way short of what we had thought we were capable of. We'd not seen what Sebastian could do on the UltraSoft or SuperSoft tyres during Friday running so his pace was an unknown, but almost straight away it was clear he had a little bit on Valtteri and was able to keep us at arm's length during the first stint. Not being able to put him under any pressure meant we couldn't create any opportunity for Valtteri so second was all we could play for today. Valtteri got a bit marginal on fuel towards the end of the race, having pushed hard to keep up in stint one but he managed it well and was able to defend the threat from Max who was putting in some quick laps towards the finish. Lewis had a tricky afternoon, from the word go we could see that we had a chassis side issue with the cooling to the power-unit that was costing us performance. We couldn't resolve this during the race but eventually found some means to contain the situation and more importantly, we were able to contain the damage and thereby manage the risk to the PU so we could complete the race. This weekend has not been ideal for either championship and we are only a third of the way into the season with a very long way still to go. We clearly need to be getting performance on the car and we will be working hard to ensure that we can perform more strongly in Paul Ricard.