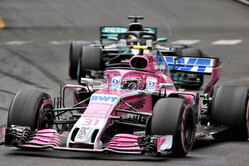 Force India has dismissed claims by rival teams that Esteban Ocon moved aside for Lewis Hamilton in Monaco following his pit stop.

In the wake of a comment made by Toto Wolff to the Belgian media following the Monaco in which he Austrian is alleged to have admitted that he asked Force India to instruct Esteban Ocon to allow Lewis Hamilton to pass following his pit stop, a number of teams contacted the FIA to complain.

With Force India a customer team of Mercedes and Ocon a member of the German team's junior programme, it is understandable that there was suspicion, however, with Hamilton on fresh rubber following his pit stop it is unlikely that the French youngster could have held him off for long even if he had wanted to.

Instead, it is claimed, Wolff called on Force India to ask Ocon to offer no resistance, and shortly after the Briton passed him heading into the chicane.

While the FIA investigated the claims and found no evidence of collusion, Force India COO Otmar Szafnauer, poo-pooed the idea of aiding Mercedes or Hamilton, insisting his team was focussing on its own strategy.

"The reason for that, I don't care what Toto says, was we were running our own race, not against Lewis at the time," he said, according to Motorsport.com. "And we didn't want to lose any time whatsoever.

"It was Alonso who pitted just before and tried to undercut us," he continued, "and what we didn't want to do was lose any time at all with Lewis such that Alonso would have a chance to get us, which is why we told Esteban not to lose any time to Lewis. Because if you're racing in your mirrors, you don't go as fast. Even if it's a couple of tenths a lap, it's too much. And when you're really close with some guy trying to undercut you, you can't do it.

"What you can do is hold him back for five, six, seven laps, he gets you anyway, but now you've lost out to Lewis, and you've lost out to the guy you're really racing. You're not racing him on track because he's pitted already, and you haven't."

The team's technical director Andy Green reinforced Szafnauer's comments, admitting that it is essentially team policy not to fight faster drivers in such circumstances.

"We do it all the time," he said. "When a fast car is coming through, we recognise that we're not racing with them, and we don't. We lose the minimum amount of time. Sometimes you can lose two seconds a lap when you're trying to defend."