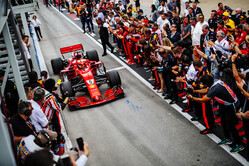 Of course, as fans of foreign movies and TV series we are hoping that today's race will live up to some of the better ones, be it a Scandi thriller, a German, Dutch or even German... and wasn't the original Mad Max an Australian production.

Of course, there are all different types of thriller, the slow brooding kind, those that explode into action over the opening credits, those that heve you guessing right up to the final shot and those that have you itching for a sequel.

FP3, where the top four were covered by just 0.107s set us up nicely, while Q2 and Q3 delivered in style.

Lewis Hamilton and Mercedes appear to have learned the error of their ways in avoiding the hypersofts so carefully, though those mistakes at T10 clearly hurt the Briton when you consider that teammate Valtteri Bottas is on the front row.

While in Monaco Daniel Ricciardo talked of "redemption", how remarkable has Max Verstappen been this weekend, setting the pace in all three practice sessions, whilst having to fend off predictably dumb questions from tabloid journalists. While it is great to see the youngster answer his critics in the best possible way, let's hope he doesn't throw it all away in the opening moments of today's episode.

The ever cool Valtteri Bottas, who has had more than his fair share of bad luck this year, could easily spring a surprise, with a plot twist that would turn the title on its head and surely few would begrudge.

Then, of course, there's Sebastian Vettel, who following a slow start in Friday's episode burst into life just when it was needed, proving that he should never, ever be written off.

Hamilton, Daniel Ricciardo and Kimi Raikkonen might all look to be playing supporting parts today, but each could spring a surprise, the Australian, still on a high following his Monaco redemption, seeking, like his teammate, to capitalise on an aggressive tyre strategy that sees them start on the ultras.

While the sport's new owners will be looking for a Homeland style cliff-hanger that allows the series to run and run and run, will we get the full-on thriller we surely deserve after Monaco and maybe even a two-parter.

As if the main feature isn't enough, we have a support act that promises to be equally entertaining.

Renault, Force India, Haas and Toro Rosso are all in the mix, even if some teams appear to only have one lead, and who exactly forgot to tell Charles Leclerc that he is driving a Sauber.

As McLaren looks to spread out to Netflix or Amazon, let's not forget that on a day we celebrate the legend that was Gilles Villeneuve, he actually made his F1 debut with the Woking outfit. Though that was back in the days the team still had ambition and a common purpose.

A late decision to change Pierre Gasly's engine again means the Frenchman will start from the back alongside countryman Romain Grosjean, so expect some fun and games at the start and possibly some heavy use of the bleeper.

While much has been made of the fact that though the tyre compounds are the same as Monaco but the two tracks are entirely different, one thing they have in common in a notorious first corner. In the Principality it is Ste Devote, while here, though a little more prosaic in that it is called Turn 1, it is just as infamous, and could well see a few broken cars (and hearts) in the opening moments.

With increased degradation, a two-stopper also works. Namely, two stints on hypersofts of 10 laps each, then one stint on supersofts to the flag.

Of course, having avoided the hypersofts like the plague, Mercedes brought very few sets of the pink-banded tyres here, a move the German outfit is already regretting.

Of course, this means the Dutch youngster has to be aggressive, and as we know from experience that doesn't always end well.

While Grosjean starts from the back courtesy of an engine issue at the start of Q1, this being a circuit where much is demanded - and expected - of the brakes - it is likely that we are going to hear plenty from the excitable Haas driver this afternoon.

Then again, will other drivers discover, like Gasly, that their engine upgrades have a down side, after all, this is a track that is power hungry.

A number of drivers need a good result today and none probably more so than Brendon Hartley, who cannot have failed to see the reports in the media earlier in the week. Having been dumped by Red Bull once before it would be cruel to see the kiwi's F1 career come to an end before he is given a proper chance.

While a number of drivers will be in the spotlight, so too will those stalwarts of Britain's heritage, Williams and McLaren, both of whom appear to be at sixes and sevens at present.

Of course, being in a team that doesn't seem to know whether it wants to be there or in IndyCar isn't the best way to approach a race mentally, so spare a thought for Fernando Alonso who today contests his 300th Grand Prix, though it will be his 297th start.

The pitlane opens and one by one the cars head out.

For a brief moments it looks as though Ricciardo has brushed the wall, but the Australian was merely only exploring the limits. Nonetheless, it is clear the circuit remains very dusty.

As the cars begin to arrive on the grid the air temperature is 19 degrees C, the track temperature is 37 degrees. It is bright and sunny, as it has been all weekend.

FOM's policy of an extra ten minutes grid time in order that the media - and celebrities - have more access to the drivers has clearly back-fired, for while the cars are in place the drivers have disappeared to the sanctuary of their garages.

A late scare has seen the intercooler on Raikkonen's car, Ferrari having checked the units on all the other Maranello-powered cars.

Just a quick reminder, like Melbourne there are three DRS zones.

Mercedes reports coolant from one of the classic cars used on the drivers parade in front of his grid slot.

The field heads off on the warm-up lap... all get away.

Behind the top ten, the Toro Rossos are on hypersofts, Sirotkin on supers and the rest on ultras.

A great start from Vettel, while Bottas and Verstappen are side by side through the first corners, with the Red Bull on the inside. However, the Mercedes is on the inside for T2, the pair side-by-side, wheel-to-wheel, neither giving an inch.

Further around the lap at T5 there is carnage as Hartley and Stroll collide. The Williams appears to lose control and move across on the Toro Ross which is on the outside.

Hartley is thrown into the air, his car riding on the front of the Williams, the two cars as one as they slither into the barriers at T6. Both are out on the spot, the worst possible conclusion to the Canadian's home race.

The VSC is deployed and then the full safety car... Ericsson and Vandoorne pit.

"Well controlled at the start," Verstappen is told. Indeed it was.