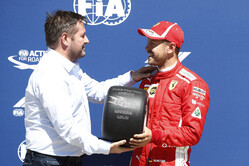 Strategy proved to be a key element of qualifying for the Canadian Grand Prix, with both Mercedes and Ferrari drivers using the ultrasoft rather than the hypersoft to set their fastest times in Q2. As a result, they will start the race on this compound, which should allow them to carry out a longer first stint than their rivals on the faster Pink hypersoft tyre – which is around a second quicker per lap.

The final top-10 qualifying shoot-out was run exclusively on the hypersoft, with Vettel beating Mercedes driver Valtteri Bottas to pole and setting a new lap record of the Montréal circuit. With the top two on the grid starting on the ultrasoft, the highest-placed hypersoft starter will be Red Bull’s Max Verstappen in third. Temperatures remained dry and warm, with 25 degrees ambient and 36 degrees centigrade on track.

Mario Isola: "Qualifying went as we expected, with an important strategic element as Mercedes and Ferrari chose the ultrasoft to set their fastest times in Q2 and therefore start the race. This has the advantage of a longer life than the hypersoft, but it is theoretically slower off the line, so the start tomorrow will be very interesting. With a wide mix of possible tactics and a historically high chance of a safety car, it’s particularly hard to make any predictions. This isn’t a race where qualifying has the biggest influence on final results, so the most important thing during the grand prix will be to react efficiently to circumstances and opportunities as they happen."