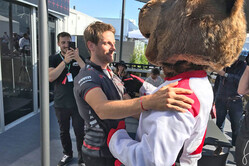 Barely had the order been given to Haas' two drivers not to crash into anything this weekend due to a lack of spares than the memes began appearing.

Sadly, few could have predicted the reality.

While Romain Grosjean kept his car out of the barriers and away from rival drivers, the Frenchman damaged his front wing when he hit a groundhog at the final chicane.

The fact that the animal had been seen at the same corner beforehand, left the Frenchman wondering why it hadn't been removed, if only for its own safety.

"It was a big impact. It was a big animal," he told reporters. "It's a bit disappointing because they showed it on TV before the beginning of the session at Turn 13, and that's exactly where I hit it. It felt like a big impact. If that happens to you in the race, your race is over, the damage was quite big.

"I'm surprised they didn't move it," he continued. "It's a shame for the animal, of course, and it's a shame for our front wing as well. We are quite limited on spare parts, and losing a front wing like this is a bit disappointing.

"I saw it," he said of the TV images shown throughout the session of the animal sitting on the grass, "but you don't know if it's still there or not. You're not going to be looking for it."

Shortly after the session the Frenchman, who has yet to score a point this season, was visited by the official mascot for the race... a groundhog.