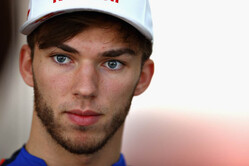 Shortly after the end of FP3, Honda discovered an issue with Pierre Gasly's engine, which, like teammate Brendon Hartley's, was the new upgraded version.

Rather than risk a grid penalty by installing a new unit however, Honda opted to revert to the Frenchman's older spec unit, and while Hartley made it through to Q2 to qualify 12th, Gasly never made the cut and qualified 16th.

"We had an issue with the engine in P3, with the new upgrade," Gasly told Sky Sports, "so we had to revert to the engine from Monaco.

"On a track like Canada the top speed is massively important," he continued, "and it made qualifying quite tough. It's always frustrating to miss out with such a small gap.

"The positive is that Brendon did a good job with the upgrades," he admitted, "so I just can't wait to put this back on my car as soon as possible.

"Looking at the positives, it's good for the coming races. It'll just be quite difficult for our side of the garage tomorrow. But I'm always full of hope. In racing, everything can happen. It won't be easy but racing never is. I just need to give it all and see what we can get tomorrow."

"Towards the end of this morning's free practice, Pierre's engine showed a drop in power," confirmed Honda technical director Toyoharu Tanabe. "As a precaution, we decided to change the entire unit.

"We will now examine everything closely to identify the cause of the problem."