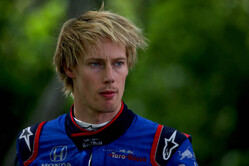 Brendon Hartley was given the all-clear after being taken to a local hospital in the aftermath of his first lap crash in Canada.

The New Zealander, who last week was the subject of speculation when it was claimed Toro Rosso had approached McLaren with a view to signing its test and reserve driver Lando Norris to replace him, was involved in a nasty first lap crash with Williams Lance Stroll.

The Canadian appeared to lose control of his car at Turn 5, careering into Hartley who was on the outside. In the moments that followed the Toro Rosso was thrown into the air, landing on the nose of the Williams and the pair subsequently slithering into the barriers at Turn 6.

While both drivers were taken to the circuit's medical centre, as is standard procedure following such incidents, it was decided to send Hartley to a local hospital for further checks. Following those checks, which included two electrocardiograms, he returned to the track by helicopter.

"I had a good start, similar to the drivers around me," said the kiwi, "but I got left a bit on the outside of Turn 2 which lost me a position.

"I got a good run on Lance out of Turn 4 on the outside, but he lost the car which put us both into the wall.

"It’s very disappointing as there was room to make the overtake, and I was looking forward to a strong race. It’s a frustrating way to end the Grand Prix as I’ve been really happy with my performance all weekend."

"I had a good start," said Stroll, "gained a few positions and got both McLarens, but I had some contact when I overtook them.

"Then I was side by side with Brendon going into turn five. The car got loose on me, I corrected it but there was not much room for both of us, and by the time I had corrected it we had touched."