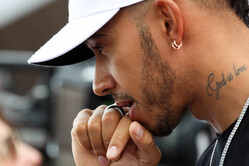 The record books will show that pole-man Valtteri Bottas retired on lap 13 with a hydraulics issues while Lewis Hamilton succumbed to a loss of fuel pressure on lap 62, just a week after the much anticipated upgraded power unit made its debut in France.

The double mechanical DNF aside, Lewis Hamilton's race was already compromised when Mercedes failed to pit the Briton under the VSC that followed, ironically, his teammate's retirement.

Before the fuel pressure issue, Hamilton was suffering major tyre issues, the Mercedes, unlike Verstappen and the Ferrari pair, unable to manage its rubber in temperatures hotter than those witnessed over the rest of the weekend.

"We were running one and two and controlling the race, and suddenly you see your second car stopping," said team boss Toto Wolff. "The VSC came out, we had half a lap to react, and we didn't. Fact! This is where we lost the race.

"At that stage of the race with the VSC, pitting is probably 80% the thing you need to do," he admitted. "With one car out there against two others, the thinking process that happened was, 'What would happen if the others pitted a car?'. We would come out behind Kimi, because they would leave Kimi out, and behind Max. What would that mean for the race?

"That whole thinking loop, I wouldn't say distracted us, but we spent too much time on that," he admitted.

In the wake of the mistake, fans could hear Hamilton getting ever more desperate as his tyres degraded, and after finally stopping and rejoining the race in fourth, the post-mortem began, with race fans given full access over the team radio.

Baffled as to why his lead, and what appeared to be a certain win, was now fourth, the Briton was advised by team strategist James Vowles that he had got it wrong, and though the win was lost the race wasn't.

In the aftermath, Hamilton, still clearly shocked by the DNF, his first of the season, insisted that things have to change.

"I'm not going to lie," he told reporters, "all areas we are going to have to work on. The car has been great all weekend, we were the quickest, but to have two different faults on each car, which is very unusual, we really can't throw away points.

"We've got to find a bulletproof method to move forward for strategy," he added. "If our car was still going it was an easy win for us. We were comfortably ahead but we will work on it and will try to re-evaluate to come back stronger for the next race."

"Everyone in the team is really feeling the pain," he admitted, "but I think you just have to look at it, we've had such great reliability for so many years and as painful as it is, and we are perfectionists, we really have to take the rough with the smooth.

"This is definitely the worst weekend for us I can remember for a long, long time. I have every confidence in my team that we'll be able to bounce back."

Referring to Vowles, whose public admission, though leading to much criticism on social media (!), won the Briton much admiration for his honesty, Hamilton said: "I saw him in the garage, we had a hug. As always, he was brutally honest with himself and with everyone and we could have all done a better job this weekend.

"It's very rare and incredibly unusual for us to have these two DNFs in one weekend. A real shame because we had a great car and were looking very strong, but we will live to fight another day."