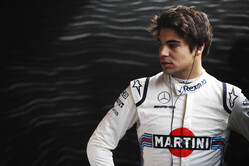 Though finishing 13th on the road, just ahead of his Williams teammate, a subsequent 10s time penalty for a blue flag infringement saw the Canadian youngster drop to 14th.

In the final laps of the race, the Williams drivers was deemed to have ignored the flue flags warning him that he was about to be passed by a quicker car, Sergio Perez.

The stewards reviewed the video evidence, team radio and heard from both drivers and their team representatives, as Stroll admitted that he had seen the blue flags, light panels and the light on his steering wheel.

He stated his team had told him to attempt to un-lap himself but had not advised him to let Perez pass until almost one lap of flags and lights had been displayed to him..

Handing the youngster the time penalty and 3 penalty points, the stewards revealed the reason for awarding the points is that the issue of blue flags was specifically raised at the Friday night drivers' briefing and confirmed in the race directors notes, in particular the requirement to allow the following car to pass "at the first available opportunity".

In this instance the driver decided to give priority to the team instruction (to un-lap himself) over the regulations and the race directors specific instructions (regarding the blue flag procedure).