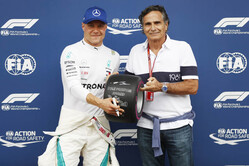 Valtteri Bottas has claimed pole position for tomorrow's Austrian Grand Prix: his first pole of the season. The Mercedes driver set a new all-time lap record in Austria on the ultrasoft tyres in Q3, earning himself the Pirelli Pole Position Award, which was presented by three-time world champion Nelson Piquet, who took the last Pirelli victory of the previous era (Canada 1991) before the Italian firm returned to Formula 1 in 2011.

The ultrasoft was mainly used throughout qualifying but both the Mercedes and Red Bull drivers elected to go through Q2 using the supersoft tyres (as was also the case in France one week ago). They will consequently start the grand prix on this compound tomorrow: the only four in the top 10 to do so.

With reasonably low degradation and dry weather expected for the race, a one-stop strategy is the most likely option for most drivers - but we have already seen some tactical variations in qualifying.

Mario Isola: "The short lap meant that we had a very close qualifying session as we expected, especially in the midfield. For the same reason, there's not a big difference between the compounds here, which - together with low degradation - opens up a number of different strategic possibilities. With Mercedes and Red Bull starting on the slightly slower supersoft tyre, among the rest of the top 10 on ultrasoft, we should see an interesting first stint tomorrow in particular. We expect mainly a one-stop race but we are likely to have a few variations on that theme, with a wide pit stop window."