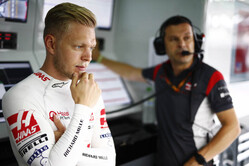 On board with the Haas driver, the TV cameras picked up on the fact that his left front wheel had not been fitted properly and was loose.

Having only travelled a few feet the Dane was pushed back into position and the situation rectified.

Speaking shortly after, when asked about the incident, team boss Guenther Steiner attempted to play it down, the American outfit having suffered more than its fair share of unsafe releases, most noticeably in Melbourne when both cars were eliminated in the wake of such incidents.

"One of guys didn't have the wheel on and it came down," said Steiner of the car. "The mistake is he pushed the button but the wheel was free, but he realised and we stopped him immediately afterwards.

"I think the system worked," he added. "It wasn't good for us because it cost us 5000 euro, but even in the race if you do something you can push it back and then go out again, you're not retiring.

"So it worked what we put in place, that's the good thing," he continued. "I'm not happy that we did a release unsafe and had to pay a fine, but we got something positive out of it."

Indeed, having reviewed the video and audio of the pit stop and heard from a team representative, who admitted that there had been a problem with the accidental triggering of the blue (“ok”) light on the wheel gun, falsely signalling that the wheel had been correctly fitted, the stewards determined that the car was released in an unsafe condition in breach of Art. 28.13(b) as the wheel was not properly attached to the car when released.

The team reacted instantly, instructing the driver to stop the car and the driver stopped the car in a safe manner immediately, but consistent with previous decisions of a similar nature, the stewards decided that the grid place penalty mentioned in Article 28.13 (b) would not be applied as the driver took all appropriate actions at the first available opportunity. Accordingly, they fined the team 5,000 euros.