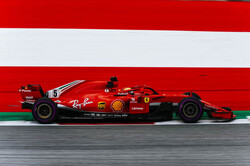 Benefitting from the engine upgrade introduced in France and the aero bits and piece introduced this weekend, Mercedes drivers Lewis Hamilton and Valtteri Bottas set the pace in FP1.

As in France, Haas appears to be best of the rest, with Romain Grosjean seventh and teammate Kevin Magnussen twelfth. The Dane would have been higher, but damage to his tyres meant he was unable to run in the latter stages of the session when a number of drivers leapfrogged him on the timesheets.

One point of interest following the earlier session is the kerbing at the final corner which caused damage to Stoffel Vandoorne's front wing and issues for a number of other drivers.

Talking of Vandoorne, McLaren has been fined 10,000 euros for the unsafe release of the Belgian earlier which saw him almost collide with Vettel in the pitlane.

Grosjean is first out when the lights go green, followed by Sirotkin, who handed his car over to Robert Kubica in the opening session. Magnussen, Sainz and Ericsson are among the other early risers.

In not time at all there are eight names on the board, Alonso topping the times with a 1:06.429. Leclerc is second, just ahead of Ericsson, Magnussen, Grosjean and Sainz.

Vettel goes quickest with a 5.915 but is instantly demoted by his teammate with a 5.711. The Finn is on supers while the German is on softs.

With an eye on the weather radar, just eight minutes into the session all but Ricciardo, Hulkenberg, Verstappen and the Mercedes pair have been out and posted times.

In close succession, Leclerc and Grosjean run wide in T1, while Ericsson has a moment at T4, locking-up and having to use the escape road in order to rejoin the track.

Replay shows Ricciardo getting sideways as he exits his garage. The Australian is on supers.

The Mercedes pair finally head out, Bottas on supers and Hamilton on softs.

Raikkonen reports that a Force India passed him under a yellow.

We take a very, very bumpy ride on board with Hamilton - courtesy of a nose mounted camera - as he goes quickest with a 4.579.

Bottas is told he can brake later in T1 as Sainz runs wide in T4 and takes a detour through the gravel.

Verstappen told to think about his entry to T4, the youngster responding that he is unhappy with the balance of his car. "My front tyres they just give up all the time in the high speed corners," he says.

Gasly is currently best of the rest, ahead of Vandoorne, Leclerc, Magnussen and Ericsson.

Twenty-six minutes into the session, the Haas duo are first to switch to the ultras.

Alonso's car is up on its stand, the McLaren understood to have suffered floor damage, as did Vandoorne's in FP1.

At which point Vettel switches to the purple-banded rubber.

A decent lap from Vandoorne sees the Belgian go tenth (5.968) on the softs.

More and more drivers switch to the ultras as attention shits to qualifying sims.

Offs in quick succession for Magnussen (T4) and Grosjean (T1).

Vettel goes quickest in S2 but a poor final sector sees him fail to improve.

The session is red flagged as his car is removed from the gravel.

The session resumes a couple of minutes later and the Mercedes pair are among the first out, both on ultrasofts.

Hartley is told its "very important to avoid the yellow kerbs at turn 9".

Ricciardo improves to fourth with a 5.031 while Grosjean posts a 5.429 to move ahead of Raikkonen.

Hamilton aborts his first qualifying sim, as does Bottas, both backing off in the final sector.

Again, both fail to improve and back of leaving it for a third flying lap.

Hamilton posts a PB in S1 but fails to maintain the pace as Alonso and Verstappen both have minor excursions. "Turn 4 doesn't feel good," reports the Red Bull driver. "First time lap I'm locking the fronts, next one I'm losing the rear."

Leclerc has a big moment in T4 the Sauber driver suffering snap oversteer which catches him out.

Vettel is told to focus on turns 7 and 9, while Verstappen is told to "think about kerbs", and we don't mean the Larry David box set.

As Alonso emerges on the ultras, the rest appear focussed on their race sims.

Alonso fails to improve, but that goes for Hulkenberg also. The Spaniard appeared to lose a piece of bodywork after running wide.

Having had issues on FP1, Magnussen now reports a power unit issue.

While the pace of the Bulls has clearly dropped off, Vettel continues to lap in the 1:08s. Raikkonen is also setting a strong pace on his race sim.

Having repaired the suspension on Gasly's car, Toro Rosso sends the Frenchman back out again.