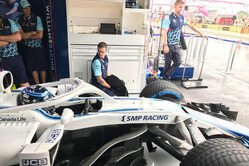 Ahead of today's sole practice session the air temperature is 25 degrees C, while the track temperature is 43 degrees. While one side of the circuit is fairly bright, the other is somewhat overcast, with officials confirming an 80% risk of rain... which means a whole new ball game.

Lewis Hamilton led the way in both of yesterday's sessions, the world champion clearly benefitting from the much-anticipated Mercedes upgrade. Unfortunately, a water leak sidelined his teammate for much of the second session.

One of the biggest facts yesterday was the wind, and in particular the way it changes direction on arriving at T6, it saw a number of drivers in trouble, none more so that Marcus Ericsson who crashed heavily in the opening session, the subsequent fire meaning he couldn't take part in FP2. Indeed, such was the damage the Swede has a new chassis today and as a result will start from the back of the grid.

In the second session, we saw Sergio Perez part company with a wheel while on a flying lap, an incident the FIA is still investigating.

An overnight engine change means Brendon Hartley will start the race from the back of the grid.

Based on yesterday's session - and the news that Mercedes has the upgrade available to all six drivers it powers, the works team is looking good. While there is talk that Ferrari is sandbagging - which wouldn't be the first time - Red Bull was around 0.7s off Hamilton's pace.

Best of the rest, based on yesterday, was Haas, the American team certainly hoping for a change of luck this weekend.

The lights go green and Leclerc leads the way, followed by Ericsson, Alonso, Magnussen and many others, all keen to get to work before the rain arrives.

"A couple of drops on the visor around Turn 4," says Ricciardo.

Vettel is told that "Kimi reports rain at Turn 5".

Among the last to head out is Hamilton.

As conditions worsen, albeit on only one part of the track, most drivers head back to their garages.

Perez goes off at T4, the Mexican clearly unable to slow his car.

As rooster tails begin to appear, Vettel is warned "be careful". Elsewhere, Verstappen has a scare when he attempts to brake for a corner and the car reacts as though on an ice rink.

Ten minutes in and silence falls over the track.

With 13 drivers having posted times, Bottas remains the benchmark, while Raikkonen down in 14th is 16.045s off the pace, just behind Hamilton who is 13th 7s off the pace.

As the waiting continues, Mercedes tweets: "Few of you tweeting in to ask why we're not out there on track... We're waiting for the wet conditions to stabilise first! It's important to balance the use of the limited wet sets of tyres we have for the weekend, as well, if quali is wet."

Ross Brawn reveals that a thunderstorm is expected during qualifying and another during tomorrow's race.

With 15:50 remaining, Stroll climbs into his car and Hulkenberg runs back from the pit-wall to climb into his.

With 10:14 remaining Alonso breaks the silence and heads on a a set of full wets. His colleagues watch with keen interest.

With only three sets of wets available for the weekend, and thunderstorms predicted later and tomorrow, one can understand why drivers are reluctant/unable to run. Once again, it is the rules that are at fault.

As Alonso slithers his way around the track and then back to his garage, Hartley, Stroll and Sirotkin try their luck.

Told to use his rain light, Stroll asks where the switch is.

"Don't take any risks, just get a feel for it" the youngster is told. Moment later he is caught out by a huge puddle in T7 and goes off. Meanwhile his teammate goes off at T8.

In the Ferrari garage, Vettel removes his balaclava and earphones.

The Williams duo persist and set times, but both are over 28s off Bottas' (dry) pace.

While Stroll is happy to stay out, Rob Smedley advises him to box admitting that he's not happy to see the driver continue in the conditions.

Nonetheless, Leclerc, Vandoorne and Gasly head out for a late reconnaissance lap.

"One timed lap, but no risk," Leclerc is told. The Sauber driver subsequently runs out of road at the chicane on the back straight.