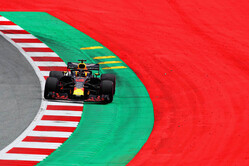 Ahead of today's opening session at the glorious Red Bull Ring, the air temperature is 18 degrees C, while the track temperature is 26 degrees. Following the sunshine enjoyed in the south of France last weekend, the weather is altogether different here in the Styrian Alps where it is overcast with a 60% chance of rain.

There is one reserve driver on duty this morning, Robert Kubica replacing Sergey Sirotkin in the Williams. Needless to say the Pole has plenty of support.

Having finally introduced its engine upgrade last weekend in France - to devastating effect - Mercedes has an upgraded aero package this weekend. Renault also has its own version of the party mode available to all three teams it supplies this weekend.

The lights go green and Alonso is among the first out, followed by Hulkenberg, Sainz, Grosjean, Ericsson, Hartley and Kubica.

As more cars head out there's a mixture of all three compounds, soft, supers and ultras.

As is often the case, while the minions head out, the Mercedes pair remain stoically in their garages.

Verstappen posts the first time of the weekend, the Dutchman posting a very conservative 1:08.474 on the supers. He subsequently improves to 6.935.

Talk of a sub 60s lap this year has been dismissed by the drivers.

Perez is the second driver to post a time, an even more conservative 12.501. The Mexican subsequently improves to 7.851.

The Mercedes pair emerge 12 minutes into the session, Bottas posting 9.615 on his first lap and teammate Hamilton 7.332 straight out of the box.

A 5.995 sees Bottas go top as Ocon posts 7.470 to go fifth ahead of Vandoorne, Hartley and Grosjean, while Gasly improves from ninth to fourth with a 7.063.

Hamilton responds with a 5.825 as Vettel and Raikkonen head out.

"My front left is not responding," says Vettel. "They're (brakes) are coming up," he is told.

Alonso's car is fitted with aero rakes as the Woking outfit seeks to find the source of its aero issues.

Bottas finally pits having improved to 5.681, as Vettel goes third (5.745) and Raikkonen fourth (5.896). The Mercedes pair are on the supers however, while the Ferraris are on ultras.

Twenty-four minutes in and Alonso is the only driver still to post a time, as Ricciardo - who has completed just 4 laps - is ninth (6.929).

Gasly expresses his frustration following a close encounter with Leclerc.

Hamilton consolidates his top spot with a 5.525.

With Alonso yet to post a time, the Williams pair are at the foot of the timesheets, both over 2.3s off the pace.

Ricciardo improves to fifth with a 6.333 as Vandoorne almost collects Vettel in the pitlane. That looked very much like an unsafe release from McLaren. "Did you see that?" asks the Ferrari driver.

As the cameras spot Jos 'The Boss' is the Red Bull garage, Magnussen is warned of "spots of rain".

On the supers, Verstappen (5.802) splits the Ferraris to take fourth.

Alonso has ditched the aero rake for flo-vis as the Woking outfit continues to use this as a glorified test session.

A 5.571 sees Ricciardo improve to second as Gasly (6.460) remains best of the rest, ahead of Sainz, Magnussen, Grosjean and Hulkenberg.

Vandoorne's front wing is scraping on the ground. As he pulls into the pits a crack can be seen on the nose of the McLaren. Replay shows him doing the damage after running wide and over the kerb at the final corner.

Indeed, replay shows Gasly having a similar moment, the Toro Rosso driver running over a piece of Vandoorne's broken wing in the process.

"I'm taking it easy, I took a bit of the yellow kerb at the exit last corner," admits Ricciardo. The Australian is currently 0.046s off Hamilton's best.

At the point where the extra set of tyres has to be handed back, the Haas duo have the track to themselves.

The Ferraris are back on track, both on fresh ultrasofts, as is Bottas who is currently 0.156s down on his teammate in third (5.681).

A 5.563 sees Vettel close to within 0.038s of Hamilton who also switches to the purple-banded rubber.

On those ultras Bottas posts 5.354 with Hamilton posting 5.037s moments later. That puts him 0.5s clear of Vettel.

A 5.417 from Vettel sees the German close to within 0.38s of Hamilton, while the Red Bull pair wait in their garages.

Improvements from both Haas drivers see the American team consolidate its best of the rest status in this session, Grosjean seventh - albeit 0.991s off the pace - and Magnussen eighth.

Bottas is told that he's losing time at the exit of T7. The Finn is currently 0.168s off his teammate's pace.

Alonso has finally posted a time, and after just 7 laps he remains 9.614s off the pace. Teammate Vandoorne is currently 15th, 2.032s off the pace.

Bottas now told that he's losing out at the exit of T3. Meanwhile, Vettel splits the Silver Arrows with a 5.180.

Alonso improves with a 7.245 as his session gets underway in earnest.

A lock-up for Bottas as Gasly splits the Haas pair with a 6.394 only to be demoted when Leclerc posts 6.215 on the ultras.

Verstappen improves to third with a 5.072, the Red Bull driver now on the ultras. Teammate Ricciardo, the Haas and Toro Rosso duos have yet to try the purple-banded rubber.

Vandoorne and McLaren have been summoned by the stewards for that unsafe release.

Leclerc has a rough ride over the kerb at the first corner.

Renault reports a nose change for Hulkenberg as the team carries out back-to-back comparisons.

With 25 minutes remaining, Hartley has completed the most laps (30), ahead of Ocon (26), Stroll, Perez and Verstappen (all on 25). Ricciardo has completed just 13, Raikkonen and Vandoorne 16.

"Cancel right hand toggle for T9 only," Alonso is told.

"Sadly Magnussen's FP1 will end early," reveals Haas. "A cut on the right rear tyre of his second set of supersofts means he can't get back out in the final half hour as first set already returned to Pirelli."