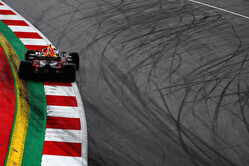 Max Verstappen has revealed that a damaged floor compromised his performance in FP2.

"I sustained a bit of damage to the floor in FP2," revealed the REd Bull driver, "running most of the session with that wasn’t ideal.

"I think it was sustained from vibration from the inside kerbs, not the big sausage ones," he added. This compromised the feel of the car so resulted in a bit of a flat day.

"It was anyway an old floor," he revealed. "We'll put on a new one tomorrow, but today we had to be a bit limited on that, so that definitely compromised the downforce of my car a bit."

The Dutch youngster was one of a number of drivers to incur damage to his car as a result of running wide and over the various kerbs used at the track.

Indeed, Pierre Gasly broke his front suspension after running foul of the kerbs at T9, while a number of other drivers lost bit of front wing and end plates.