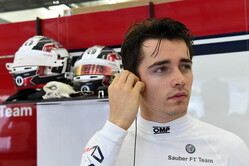 Following a late technical issue, Sauber has elected to change the gearbox on Charles Leclerc's car ahead of qualifying.

As the change is before the required six consecutive events the Monegasque will take a 5-place penalty for tomorrow's Austrian Grand Prix.

"5 places penalty because of a gearbox change," tweeted the youngster ahead of Q1. "It's fine, we'll push to get the best result anyway."

Leclerc, who has scored points in four of the last five races, is the centre of much media speculation at present as it is claimed he will replace Kimi Raikkonen at Ferrari next year.

Having posted the tenth quickest time earlier, despite the penalty the youngster is still expected to challenge for a place in Q3 this afternoon.