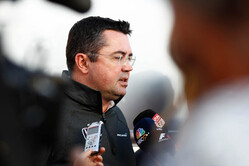 In the wake of the latest management reshuffle at McLaren, team boss Zak Brown admits that departing race director Eric Boullier knew it was coming.

The confirmation that someone was to pay the price for McLaren's continued poor form came as no surprise today, even if the timing and the identity of the person concerned did.

Eric Boullier is out as Race Director, while Simon Roberts will oversee production, engineering and logistics, Andrea Stella is appointed Performance Director, responsible for trackside operations and Gil de Ferran takes up the new role of Sporting Director.

Explaining the reasoning behind the reshuffle, Zak Brown began by revealing that Boullier was fully aware of what was to come.

"Eric's resignation wasn't a surprise," said the American. "I spend a lot of a time with the team, a lot of time with Eric, he's someone I have known for a long time.

"Obviously we have been under a lot of pressure and underperforming for too long, so Eric and I have had many conversations around how we can improve McLaren, and so we'd had conversations in the past of what's the best way to do that."

At the Friday press conference, just hours after McEvoy had revealed 'Freddo-gate', and claimed a whistle-blower at Woking had revealed a "toxic" atmosphere within the team and unrest with a management that was "clueless", Boullier was asked: "Do you expect to still be in your job at Silverstone?"

"Yes. Of course," came the reply. "It's a journey. It's not a plug and play story. It's a journey when you have to work too. You're after me, apparently...

"But you're being briefed against, by your own staff, by your management..." said McEvoy.

"I think you are lying now," said the Frenchman.

Whether Boullier was aware at that stage or not we don't know, but clearly McEvoy knew, and his claim that the Frenchman was being "briefed against", by his "own staff" and "management" speaks volumes.

In the meantime, following the reshuffle that follows the previous reshuffle, Brown admits the team has been under-performing.

"Our results this year have demonstrated we have a big performance issues," he admitted. "We are punching well below our weight given the history, the talent of people, the resources and the technology we have at our disposal.

"We all share in the pain of not seeing a McLaren be successful like we know it can be. It's a completely unacceptable situation we find ourselves in, it is very painful for all of us here at McLaren, but the one thing we will not do is quit.

"However, we are not in a good enough place and we expect to be much better. We have announced this big change to get our house in order.

"We are not going to knee-jerk react," he insisted, the team having lost its race director days before its home Grand Prix, "the team needs a period of stabilisation so we can build a strong foundation.

"The situation was not created overnight and therefore will not be fixed overnight, so today is our first step in getting back to our winning ways."