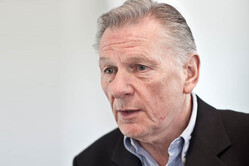 His introduction of carbon-fibre to Formula One in 1981 was to radically change the sport, while in 1989, now with Ferrari, he introduced the semi-automatic gearbox.

During his time with McLaren the Woking outfit was almost unbeatable, and while he never reached the same dizzy heights during subsequent spells with Ferrari, Benetton and Arrows he was responsible for some of the best looking race-winning cars ever to grace the grid.

Speaking to Reuters, just hours ahead of McLaren's announcement that it had parted company with race director Eric Boullier, John Barnard suggested that his old team lacked leadership.

"I think it's a fundamental problem of technical leadership, because I don't think there is any there," he said. "Somebody needs to be sitting on top of that technical pyramid pulling it together, keeping everybody going in the same direction. And I don't see that happening."

Comparing the Woking team to a slow turning oil tanker, he said: "If you've got people on board who are fundamentally saying that's a load of rubbish, we're going in the wrong way, this is no good' then you've got two choices. If your technical boss is no good, then he should be moved out. Or the people that are saying it down the ranks should be moved out. It's a tough old game. It's not a pleasant game. You've got to be a bit nasty.

"They've had three years of... well, frankly we don't know how good or bad an engine. But they've all been saying 'we've got the best chassis on the grid, it's all the engine'.

"I mean, come on guys. If somebody doesn't stamp on that and say 'we may be wrong' then this is where you are going to end up. At the bottom of the pile. And that's the way they're going," he concluded.

While McLaren might point to its subsequent management reshuffle, it is unlikely that Barnard will be impressed.

Though some had their doubts about Boullier, he appears to be the sacrificial lamb here, the scapegoat.

He is not the designer of the MCL33, or indeed the MCL32. He is not responsible for the decision to drop Honda in favour of Renault - a move that Zak Brown claims Ron Dennis would have made also.

Boullier is not responsible for the vast spaces on the car totally devoid of sponsor decals or the claim that title sponsors are no longer the thing - this at a time Red Bull and Sauber clearly think otherwise - he is also not responsible for Fernando Alonso effectively being given Carte Blanche to pursue his various motorsport goals whilst still being allowed to use McLaren as a personal hoarding for his clothing company.

Anyone who believes that Boullier's 'departure' will witness a turn-around in fortune for the Woking team is in for a rude shock, sadly the team is in freefall and the buck stops a lot higher than Monsieur Boullier.