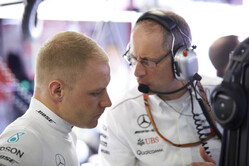 Shortly before today's opening practice session, Mercedes revealed that Valtteri Bottas has been issued his third power unit of the season as the German team carries out further investigations on the unit he used in Austria where the team suffered a double technical DNF.

"Bottas will take a third Power Unit for the British GP," said the team. "This is a precaution after we suffered high temps on his second PU from heat soak following his retirement in Austria.

"This does not mean Power Unit 2 is out of service," it added. "It will be thoroughly checked and used again for the German GP. Bottas will not take a penalty as we remain within the permitted contingent of components."

None the less, with the new rules dictating that only three units may be used before penalties kick-in, this will be a worrying move for the German outfit and its drivers, including Lewis Hamilton who is seeking a record sixth win at Silverstone this weekend.