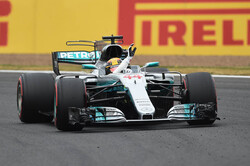 The P Zero Ice Blue hard tyres makes its season debut at the rapid Silverstone circuit in England: known as the 'home of British motorsport'. While the Ice Blue hard is new for this season, it is the equivalent of last year's medium, which means that effectively the nomination (together with the medium and the soft) is similar to last year. The British Grand Prix ends the first-ever triple-header in Formula 1 history, but the Pirelli team will stay on afterwards for a tyre development test aimed at 2019.

Silverstone is one of the most demanding circuits of the year when it comes to tyres, mainly because of the series of long and fast corners that puts plenty of energy through them.

The track has been completely resurfaced this year, resulting in faster asphalt with high grip but low degradation. Consequently tyres with a tread depth reduced by 0.4 mm will be used for the final time this season to reduce overheating (as was the case in Spain and France).

British weather is famous for its unpredictability: anything can happen during the weekend.

The track is quite heavily used during the year, so it tends to rubber in reasonably quickly.

Pirelli's 2019 development programme will continue after the British Grand Prix, with Red Bull, Haas and Williams testing slick tyres on Tuesday and Wednesday.

Most teams have made their choices strongly in favour of the soft tyre for Silverstone, with quite a wide variation among the medium and hard selections.

Mario Isola: "Silverstone is always a big challenge for tyres, thanks to lateral loads that can amount to 5g or more. Because of this, we have decided to give the hard tyre its debut at Silverstone, to come with some of the most significant demands of the season. Nonetheless, with the whole of the range going one step softer this year, this is effectively the equivalent of last year's nomination. The new asphalt results in faster lap times, as we've already seen through data collected from our GT racing programme, putting more energy through the tyres. This is why we have not gone any softer than last year. But that's without taking into account the notorious changeability of the British weather, which could give us bright sunshine or heavy rain, so teams will have to be ready for anything."