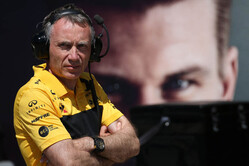 Cyril Abiteboul, Renault Sport Racing Managing Director: We head to Austria, the second leg of the triple header, on the back of what was our busiest Grand Prix since our return in 2016. The first French Grand Prix in ten years was a special weekend for the team, and we have contributed nicely both on and off the track.

The race at Paul Ricard exemplified an apt summary of our current situation. We undoubtedly have two talented drivers, and they showed great professionalism in their drives. We executed a good strategy and proved to be at the top of the midfield with our race pace. That was tempered by an unfortunate MGU-K failure which cost Carlos more points so close to the chequered flag. Nevertheless, we can take pride from his and the team's performance in front of an enthusiastic French crowd.

There is no time to dwell on our third double-points finish in a row as we move on to Spielberg. Back-to-back races are always challenging, but we know what to expect and we will be aiming to carry the momentum shown in France into Austria and then onward to England. Austria certainly won't be as busy as France off track, but the core sporting job remains, and there is a lot more hard work to put in if we are to tighten the grip on fourth place in the Constructors' Championship.

After the team's third double points finish in a row in France at the weekend, focus immediately switches to the hills of Austria, as Chief Technical Officer Bob Bell outlines the key challenges to Spielberg.

What are the main characteristics of Austria?
Bob Bell: It's quite a high-altitude circuit, so that puts the engine under a little bit of stress. It has the potential for quite high brake wear and temperatures, so we need to be cautious on brakes. Some of the kerbs are quite vicious and will break the car if the drivers hit them. There's an extra DRS zone this year, so we'll assess what opportunities that might bring.

In terms of set-up, it's a medium to high downforce circuit, with a lot of stress on the rear tyres, which can cause overheating. That was a problem we faced last year so we'll probably see that again this year. The first three corners are low speed, then it's into the higher speed stuff.

What are the considerations for the team this weekend?
BB: The focus will be how to set-up the car for the race and how to preserve the rear tyres as that will increase our chances of doing a one-stop strategy. There will be slightly less focus on getting a one-lap time in qualifying in terms of set-up. We'll be aiming to strike a good balance with the car between the high and low speed to help preserve the tyres.

How difficult is it to prepare for three races in a row?
BB: We're quite used to back-to-back races, so I think Silverstone will be the trickier one. Austria shouldn't present too many problems in terms of logistics. Because it's the second of three races in a row, there won't be too many updates. We're aiming to bring a lighter cooling system for the MGU-K and that will benefit Nico more than Carlos as Nico's is slightly heavier.

How pleasing is it to have two drivers regularly scoring points?
BB: They've both bought into the idea that this year is more about racing for the team than for themselves. They are doing a great job of doing that and are working well together. They are both fast and very well-matched. It's beneficial as they report the same things and have the same views, but they come from slightly different angles and that helps us triangulate on the problems.