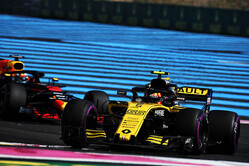 After a strong start to P3 on track, Carlos was on course to secure an impressive sixth place at the team's home race, but ultimately finished in eighth after a technical issue in the closing laps. Today's result - the team's third double-points finish in a row - means the grip on fourth place in the Constructors' Championship strengthens to 62 points, surpassing last season's total points haul before the halfway mark of the year.

Nico Hulkenberg: "It was good out there today, I'm happy to gain a few places and finish in the points. Lap one was interesting, just to survive was important as it was carnage everywhere. We were a little on the back foot yesterday, so ninth was probably the best we could achieve today. I had fun out there, though, making a couple of overtakes and enjoying a bit of racing. Carlos was on for a good result and it's a pity he missed out on sixth as that would have been really good points for the team. Overall, we've gained points in the Constructors' so that's not too bad at all."

Carlos Sainz: "It hurts a little bit to end the race like that. We were having such a good weekend from start to finish. We had a strong qualifying, made a clean start running in the top three early on, and then controlling sixth. The second-half of the race was fast-paced and we were managing it well until the sudden problem, which cost us two or three seconds a lap. It's a shame and I feel sorry for the whole team, as I think we deserved to be best of the rest today. These things happen in racing, and it's my first reliability issue of the year, so let's move on and start preparing Austria."

Cyril Abiteboul, Team Principal: "I will remember this weekend for a long time. Outside of the sporting results it's been an amazing weekend and in particular seeing the crowd just before the race was really something special. As the French team of the Championship we were fully mobilised to turn this first edition into a success, so it was a huge reward for all involved including all the fans invited by Renault. Moving onto the racing, today we had a decent finish with a bit of frustration. It was pretty much a perfect weekend from Carlos so I feel sorry for him and losing some well-deserved places due to the MGU-K failure. Nico did struggle more this weekend and was not able to deliver his customary strong finish, however we come away with a number of points on a track we knew would be challenging. We are still consolidating that fourth position and are now five points ahead of our entire 2017 points tally after only eight races. We are getting stronger and we must employ all the support we feel from French Grand Prix this weekend to keep pushing."