Renault duo look ahead to Austria 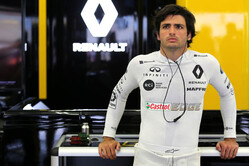 Nico Hulkenberg drove with determination at Paul Ricard to seal two points, which means he moves up a spot to seventh in the Drivers' Championship. Now the German aims to get over the next hurdle in Austria, the second leg of the triple header.

What do you like about the Austrian Grand Prix?
Nico Hulkenberg: Austria is always such a welcoming event with a very relaxed atmosphere and usually a lot of German fans who make the trip over the border. Now that Germany is back on the calendar, it's not quite a home race for me, but last year it certainly felt a little bit like that! Spielberg is a unique race on the calendar, because it's so quiet, in the middle of nowhere, with hills, lots of fields and cows. It's a very pretty scene. It makes a welcome change to the usual Grand Prix circuit.

How challenging is a lap of the circuit?
NH: It's a short lap with just nine corners to get through, but it's certainly no easy ride. It's challenging and technical, with elevation changes, big kerbs you need to watch and a mix of low to high-speed corners. I'd say there's more at this circuit than meets the eye! We struggled slightly with understeer and keeping the rear tyres cool last year, so that'll be something to assess in the early running on Friday. We are on the throttle for the majority of the lap too, so engine performance is another key area.

What can the Hulk recommend from Austrian cuisine?
NH: I'm a big fan of schnitzels, and they come from Austria, so I recommend tucking into a few of them over the weekend. Kaiserschmarrn too is nice, it's a traditional Austrian dessert.

Carlos Sainz added to his impressive points-scoring run in France - his sixth in a row - after a strong race where he ran as high as third and looked set to take sixth within a handful of laps of the chequered flag. He's aiming to keep scoring in Austria.

What's so special about Austria?
Carlos Sainz: The view in Austria is obviously spectacular, and it's one of the best backdrops at any circuit in the world. It's definitely one of the cooler places to go racing - something fresh to what we usually do and see - and certainly one I look forward to with excitement.

How tough is it to race back-to-back?
CS: I don't mind having back-to-back races in Europe, because you have enough time to go home for a couple of days between races. That frees up some time to fit some training in, see friends and family and generally unwind a little bit. Three races in a row is going to be tough, but we're already one down, so we need to dig in and push for these next two.

What are the main challenges of the Spielberg circuit?
CS: It's not an easy lap to get through, even though it's nine corners long. There are elevation changes, as you go up the hills and back down again, high kerbs which will break the car if you hit them too hard and a variety of corner lengths and speeds. There are plenty of things to keep you on guard. The circuit has a lot of grip and is quite a smooth surface, so that makes things slightly easier.

How do you reflect on France?
CS: We have to take the positives, as it was a really nice weekend and the atmosphere in France was spectacular! Unfortunately, we couldn't finish sixth due to a loss of power in the last laps of the race. However, we enjoyed a very positive weekend with a good qualifying and start, it was a lot of fun sitting in third during the early laps of the race, and we had strong race pace. I think it's very bright for the team that we keep putting both cars in the points to consolidate fourth position in the Constructors' Championship. Let's focus on Austria and do it all again.