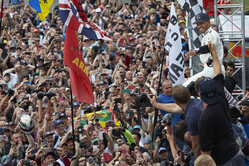 Ahead of this year's British Grand Prix, a number of changes have been carried out at Silverstone.

Most notably, the entire track has been resurfaced, which will result in faster asphalt with high grip but low degradation.

Consequently tyres with a tread depth reduced by 0.4 mm will be used for the final time this season to reduce overheating - as was the case in Spain and France.

At the best of times, Silverstone is one of the most demanding circuits of the year when it comes to tyres, mainly because of the series of long and fast corners that puts plenty of energy through them.

"Silverstone is always a big challenge for tyres, thanks to lateral loads that can amount to 5g or more," explains Pirelli's Mario Isola. "Because of this, we have decided to give the hard tyre its debut at Silverstone, to come with some of the most significant demands of the season.

"Nonetheless, with the whole of the range going one step softer this year, this is effectively the equivalent of last year's nomination. The new asphalt results in faster lap times, as we've already seen through data collected from our GT racing programme, putting more energy through the tyres. This is why we have not gone any softer than last year."

In addition to the track resurfacing, the longitudinal and lateral cambers of the track have been changed to assist drainage in Turns 1, 6, 16, 17 and 18, while new kerb elements have been added behind the existing kerb on the exit of turn 15 and at the apex of Turn 17.

As was the case in Melbourne, Montreal and last week at the Red Bull Ring, Silverstone will have three DRS zones this year.

Last year's race was won by Lewis Hamilton on a one-stop strategy, the Briton starting on supersofts before switching to softs.

While teammate Bottas started on softs before switching to supersofts, only three of the leading twelve drivers made more than one stop.

A sixth victory this weekend would not only give Hamilton the outright record for British Grand Prix wins but also be a fifth consecutive win, beating the record of four he currently shares with Clark.

While the track has been used in its current configuration since 2010, the grid has only been in its current location since 2011. Hamilton is the only driver to win from pole position, doing so in each of the last three years. He is also the winner from furthest back on this layout, winning from P6 in 2014.

With England currently experiencing a rare heatwave, conditions are expected to be dry and warm this weekend, with temperatures reaching a high of 28 degrees C on Sunday. Though Friday will see some cloud, rain is not expected at any point over the GP weekend.