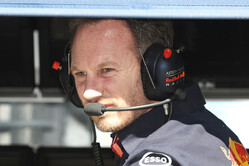 Max Verstappen's win on Sunday means that Red Bull, like Mercedes and Ferrari, has won three races this season.

Despite the fact that his team is currently 58 points behind title leader Ferrari, and the double retirement of the Mercedes duo was a major factor in Verstappen's win, it has given Christian Horner a spring in his step.

Having mostly claimed that his team's shortcomings were the fault of Renault - a move which will see the Austrian outfit switch to Honda power next year - and conveniently forgetting that it was Renault which powered Verstappen to Sunday's win, and Ricciardo's brace of victories previously - Horner was in feisty mood as he met with journos ahead of the British Grand Prix this weekend.

Insisting that both titles are up for grabs, the Briton hinted that being under sustained, intense pressure for the first time since the hybrid formula was introduced is getting to Mercedes.

"If you look at Mercedes' history, the team is basically what Ross put in place several years ago," said, referring to Ross Brawn who now heads the technical side of the sport's management. "Of course it's been added to and they've had a great advantage over the last few years, and their only main competition has been internal between their own drivers.

"They have got so used to being at the front it becomes easy to become complacent,” he continued. “And there is an adjustment when that isn’t happening and you are having to fight and having to scrap.

“The management of the team have never been in a position where they have had to go head to head for an entire season," he insisted, "and the closer you get to the end of the year the more the pressure builds, so it is a new experience for them.

"They are obviously very capable people there, but our role if we get close enough will be to put pressure on, because we've seen that when you do put pressure on Mercedes mistakes do happen."

In particular, Horner singled out the incident on Sunday, when strategist James Vowles apologised to Lewis Hamilton over the team radio for a mistake which lost him a potential win.

“It seems a fairly bizarre thing to need to do,” said Horner. “For somebody to throw themselves under the bus to motivate a driver to go from fourth back into the lead.”

“One thing you have to do is win as a team and lose as a team,” he added. “That’s why we hardly talk about individuals. Because that puts an unfair amount of scrutiny and pressure on that individual. Our philosophy is that as a team, it is collective responsibility.”

Of course, this is the team that has dumped drivers mid-season, sometimes to re-recruit them, and which is still, if you look at sister team Toro Rosso, destroying the likes of Brendon Hartley by openly pursuing alternative drivers while seemingly using him as a guinea pig as the Faenza outfit continues the preparations for next year when Red Bull switches to Honda.

As for getting used to being at the front, having won successive titles with Renault, it was only when it became clear that the French outfit had made a hash of its hybrid power unit that Red Bull sought an alternative, threatening to quit the sport after Mercedes (and Ferrari) refused to supply the Austrian team.