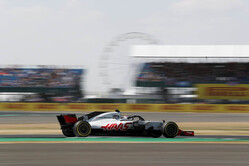 The 10th round of the 2018 FIA Formula One World Championship began with practice Friday at Silverstone Circuit as teams prepared for the British Grand Prix Sunday. Two 90-minute sessions - FP1 and FP2 - on the 5.891-kilometer (3.66-mile), 18-turn track were run under sunny and warm conditions.

With approximately 30 minutes remaining in the opening session, Grosjean spun off the incredibly quick Abbey Curve in turn one, shooting across the gravel trap before nosing hard into the barrier. Grosjean emerged unscathed, but the same could not be said for his Haas VF-18. There was structural damage to his chassis, which meant the team was forced to build a backup chassis, which kept Grosjean out of FP2. Despite the crash, Grosjean proved quick, even with only 12 laps of on-track running. Riding on Pirelli P Zero Yellow soft tires, he notched the seventh-fastest time with a lap of 1:29.352 on his penultimate tour, a best-of-the-rest mark behind the big three of Mercedes, Scuderia Ferrari and Red Bull.

Magnussen ran 20 laps in FP1 and ended the session as the 14th-fastest driver with a 1:30.065 secured on his 13th lap. With two virtual safety car periods - one for Grosjean's spin and another in the final 10 minutes for when Max Verstappen had to park his Red Bull on the frontstraight - Magnussen was unable to get the high-fuel run he and the team wanted while running on a used set of Yellow softs.

The Silverstone track record of 1:26.600, set last year by Hamilton in the final round of qualifying, remained intact.

Romain Grosjean: "We're not pleased to miss FP2, but there's been some good work done on Kevin's car. I was following the whole afternoon session. Obviously, we're going to try and squeeze as much out of FP3 as we can. The car was fast this morning, so I think we should be alright. Hopefully, we can build up nicely tomorrow, and then do some fine tuning for qualifying when the track temperature gets really high. That's going to be the biggest challenge for us, as we haven't run those high track temperatures. Kevin was doing some good runs. I've just been looking at what he was doing out there, and trying to take that on-board for ourselves for our side of the garage."

Kevin Magnussen: "The heat's been the same for everyone, but it's something that's making the tire management a bit trickier. Getting them to work - it's always the main thing. The tires, for all the teams, can be difficult to manage, but that's the focus. I think tomorrow we could be anywhere from seventh to 13th or something like that. It's very close. You need to really hook it up to get in front of that midfield, but I think it's all open. We need to go through the data a bit more to learn about today because we didn't find many answers in the practice itself. We'll go through everything and see if we can find some answers."

Guenther Steiner: "Romain switched off his DRS a little bit too late on his second fast lap and he lost grip in the rear, because he lost downforce, basically, and he spun out and hit the wall. We had to change the chassis because there is some damage, and it's easier to change the chassis than it is to try and fix it. The good thing is that Romain was fast and we know what happened to Kevin, so we know he can be faster too. So, I'm cautiously optimistic for tomorrow. Missing one car in FP2 didn't help us, but we've been in difficult positions before and gotten out of them. All in all, the car has shown good potential."