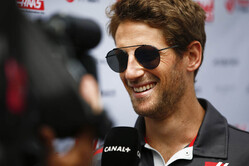 Haas F1 Team earned a double-points finish in the Austrian Grand Prix Sunday at the Red Bull Ring in Spielberg with drivers Romain Grosjean and Kevin Magnussen finishing fourth and fifth, respectively, in the ninth round of the 2018 FIA Formula One World Championship.

Grosjean's fourth-place drive is the best finish for Haas F1 Team in its three-year tenure, and with Magnussen securing fifth, it marked the best collective result for the American squad, and it came in its milestone 50th grand prix. It was also Haas F1 Team's first double-points result of the season and its third in team history, with the previous one coming last October in the Japanese Grand Prix.

The haul of 22 points bumped Haas F1 Team up to fifth in the constructors' standings to leapfrog Force India and McLaren. Haas F1 Team now has 49 points and is 13 points behind fourth-place Renault with a five-point margin over sixth-place McLaren, a seven-point gap to seventh-place Force India and a 30-point advantage over eighth-place Toro Rosso. With 12 races still remaining in 2018, Haas F1 Team has already surpassed its point tally from last season where it scored 47 points, 18 more than the total earned in its debut in 2016.

The genesis of Haas F1 Team's strong finish on Sunday came from a strong qualifying effort on Saturday. Grosjean qualified sixth, but was able to start fifth after third-place qualifier Sebastian Vettel was served a five-place grid penalty. Magnussen qualified a solid eighth.

Each performed well at the drop of the green flag, but seventh-place starter Daniel Ricciardo quickly maneuvered his Red Bull past Grosjean at the onset of lap one while Vettel powered his Scuderia Ferrari by Grosjean a lap later. After three laps, Grosjean was seventh and Magnussen was eighth.

Both Haas F1 Team drivers employed a one-stop strategy in the 71-lap race around the 4.318-kilometer (2.683-mile), 10-turn circuit, swapping the Pirelli P Zero Purple ultrasoft tires they used to start the race for a new set of Yellow softs that carried them to the finish. However, they made their scheduled stops under different circumstances.

When polesitter Valtteri Bottas encountered a mechanical problem on lap 14 and stopped his Mercedes on the track, a full-course yellow flag brought out the Virtual Safety Car (VSC). Grosjean took advantage of the opportunity and ducked into the pits on lap 15, along with many of his counterparts, and emerged in eighth place.

Magnussen stayed out to pick up sixth place, and remained there until he made his scheduled pit stop under green on lap 28, dropping him to ninth. This brought Grosjean to sixth, as he grabbed seventh a lap prior when Sergio Perez pitted his Force India.

Magnussen regained eighth when Carlos Sainz Jr., pitted his Renault on lap 34. He then set his sights on seventh-place Esteban Ocon, eventually passing the Force India driver on lap 48.

With 20 laps remaining, Grosjean was sixth and Magnussen was seventh, and it appeared this is where they would finish. But on lap 54, fifth-place Ricciardo was forced to retire his Red Bull, handing fifth to Grosjean and sixth to Magnussen. Then on lap 63, fourth-place Lewis Hamilton joined Ricciardo on the sidelines, with his Mercedes losing power and stopping on the circuit. This brought Grosjean up to fourth and Magnussen to fifth, with each driver wheeling their Haas VF-18s to an impressive top-five result.

While Haas F1 Team earned constructors' points at the Red Bull Ring, each driver earned points toward the 2018 championship. Magnussen is an impressive seventh with 37 points and Grosjean is 15th with 12 points.

The 2018 FIA Formula One World Championship resumes with the British Grand Prix July 8 at Silverstone Circuit.

Romain Grosjean: "It's a great day for all of us, the whole team. They deserve such a good result with the cars finishing fourth and fifth. It's incredible for our 50th grand prix. I'm so, so happy for all the guys. We've done an amazing job all weekend. We had some luck in the race with the Mercedes cars not finishing, but it's been a great weekend and we can really build on that. There are still a few things we can improve here and there, but I'm happy we managed to get that long stint on the tires. The last 20 laps were not fun - there were blisters on the rears - and I was afraid they were going to explode at any time. I am just so happy that we hung in there and finished fourth and fifth."

Kevin Magnussen: "We've had a very good weekend. To challenge for top-five, we didn't expect that. We finished both cars in the top-five, and that's an incredible job from the team and I'm really proud of the whole team. We were struggling with blistering on the tires - the whole of the soft stint. They blistered very badly. I managed that, and then had pressure from behind, so I had to push, but I had a good race. We've shown this weekend that we've got a good car. Actually, it's not only this weekend - we've shown all year that the car is very competitive. We've just got to keep going like this."

Guenther Steiner: "A fantastic weekend for the whole team. We can be proud of our workforce, for all the guys. It's just a great day, and on the 50th race, to finish fourth and fifth, what more can you wish for?"