No further action over Raikkonen incident 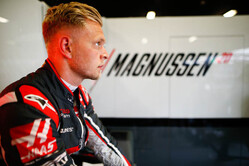 The Haas driver was behind the Ferrari as he began his last-ditch flying lap, yet to post a time, however, having passed the Ferrari, the Finn, who was fuelled for two flying laps, and had messed up the first of them, subsequently re-passed the Dane on the back straight only to subsequently abandon his lap.

Able to post only the ninth best time of the session, Magnussen, who has been among the 'best of the rest' all weekend, was livid.

Asked about the incident in the media debrief, the Dane was still clearly very angry.

"So it's three laps in a row that he tried to push and it makes no sense. There's no way to predict what he is going to do. And then he obviously overtakes me into Turn 1, and ***** my lap, and doesn't even complete his lap.

"It's frustrating what happened. I don't think it was necessary," added the Dane. "I think he just had no idea what to do and he was desperate to get a lap, he hadn't done a lap, he****** all his laps. He was desperate."

Both drivers were subsequently called before the stewards, who looked at video evidence of the incident and also listened to the team radio communications.

"There is no doubt that the "push" lap of car 20 (Magnussen) was thwarted by the proximity of Car 7 (Raikkonen)," they said, "which overtook car 20 just after it had started the lap. This was the last opportunity for each driver to achieve a fast lap in Q3.

The stewards noted that Magnussen was unsure of the intentions of Raikkonen during the last half of the previous lap, where the Dane was on an "out" lap and the Finn had aborted a push lap.

Raikkonen did slow towards the end of that lap but when compared to a previous out lap in Q3, there was a similar pattern of slowing in the same area.

"The Stewards are not of the view that the driver of car 7 "unnecessarily impeded" car 20," read the subsequent report.

"In addition, the Stewards do not consider that the driver of car 7 drove "unnecessarily slowly."

Despite the negative effect the incident had on Magnussen's lap, the stewards declined to take any further action.