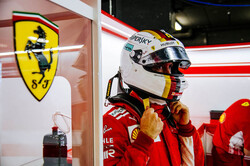 It was a rain-free qualifying session at the Paul Ricard circuit today, but a day of mixed feelings for Scuderia Ferrari drivers Sebastian Vettel and Kimi Raikkonen. While the former secured third place on tomorrow's starting grid, the latter could do no better than sixth, due to a few mistakes on his last run. Anyway, the race pace of the SF71H looked encouraging during Friday's long runs and the race may have some surprises in store for our drivers. Meanwhile, it's worth noting that five out of six Ferrari Power Units made it to Q3 in today's qualifying.

Sebastian Vettel: "During the session it was getting better and better and I was more confident. So, I think today we can be happy with the third place. My last run was not spectacular, though, and I don't think it was good enough to put me n the front row. After my first attempt in Q3, I had thought I could be closer to Mercedes and hoped to improve. But, unfortunately, in my last fast run I pushed a bit too much and made some mistakes here and there. Anyway, the car is good and we proved it. Let's see what happens tomorrow, as we start with different tyre strategies. I think the car should be strong in the race".

Kimi Raikkonen: "My car was working well today and it was a pretty straightforward qualifying until my last run. I was not able to put a timed lap together in the whole of Q3. The first run was pretty decent, but then I went a bit sideways in turn 11, and lost time. After that I was not able to improve my lap time. For tomorrow we chose the strategy that we think is the best for us, but we have to wait and see. In other races we have seen people starting with different tires and it did not change things from night to day. For sure tomorrow will be a challenging day".