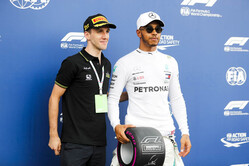 Mercedes driver Lewis Hamilton claimed pole for the French Grand Prix on the ultrasoft tyre and so claimed the Pirelli Pole Position Award. This was given to him by British cyclist Simon Yates, who earlier completed a lap of the Paul Ricard track on Pirelli P Zero Velo tyres, with which his Mitchelton-Scott team will contest the forthcoming Tour de France.

Hamilton set his quickest time on the ultrasoft compound, despite some spots of rain in Q3, following a downpour throughout most of FP3. More uncertain weather is a possibility during the race tomorrow.

Both Mercedes and Red Bull drivers set their fastest time in Q2 on the supersoft tyre, meaning that this is the compound they will start the grand prix with. A one-stopper seems likely, but a two-stopper could be quick as well.

Mario Isola: "Track and air temperatures were a lot cooler than they were yesterday, with the rain in FP3 also washing away much of the rubber that had been laid down earlier. This meant that teams had to cope with changing track conditions, during a tricky qualifying hour made even more complicated by a red flag interruption during the final Q3 session. In the end the times were extremely close, with little to split the top three teams. With Ferrari's third-placed Sebastian Vettel being the only car in the top five to begin the race on the fast-starting ultrasoft compound, we should be in for an interesting start to the race tomorrow".