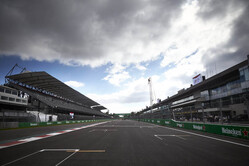 Despite Tuesday's earthquake, which was of 7.1 magnitude, and which has thus far claimed over 200 lives, organisers of next month's Mexican Grand Prix insist the race will go ahead.

As efforts to find survivors continue, Autodromo Hermanos Rodriguez marketing boss, Rodrigo Sanchez, has told reporters that the circuit has not been damaged and the race, scheduled for 29 October, will go ahead.

“It’s been inspected twice already from the track surface and also the buildings, and it’s OK,” he said. “We’ll continue doing the assessments as we go but so far there’s really no concern. We’ll have a race.”

However, in the wake of Mexico's deadliest earthquake in three decades, Sanchez insisted that the main concern is rescuing survivors and helping those affected.

“We’re trying to put out there all the information relevant to how people can help," he said. "Right now the concern is really getting everything back to moving from the city perspective and supporting any way we can.

“If things stay the same, we’ll just keep working on what we’re doing. The track is fine so we just need to re-focus and get this show done.”

Sergio Perez is donating £125,000 to the relief effort, with the Carlos Slim Foundation adding 5 pesos for every peso donated.