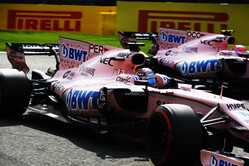 Despite the many sleepless nights he and his colleagues have suffered this season as a result of their feuding, Force India deputy team principal, Bob Fernley admits the team is keen to retain both Sergio Perez and Esteban Ocon for next season.

With the warring duo banned from racing one another following their shenanigans at Spa, the sport looked on with bated breath as the two were separated by jest the Williams duo in the final stages of Sunday's race at Monza. And while, we didn't see the Pink Panthers battling for the same piece of track at the Autodromo Nazionale, it is almost certain that the pair will come across one another in the remaining seven races.

Despite the various clashes however, Fernley is adamant he wants to keep both drivers, though they are understood to be on the 'want list' of a number of teams, not least Renault.

"From our side we are fully committed to retaining them both and that will be our objective," says Fernley. "There's no question of that.

"But, you know, driver markets are driver markets and it's quite right and proper that their managers, and in particular Checo's manager, is out looking at other programmes. He's got to keep us on our toes. If he didn't do that, he wouldn't be doing his job, and we've got to make sure that we close that off and retain him for next year and keep the pairing.

"It's a phenomenally exciting pairing," he added. "It might be difficult to control a little bit, but I'd like to have that problem."

Asked about their propensity to fight for the same piece of tarmac, he said: "We're very blessed to have two very talented and equally very competitive drivers.

"They're at different stages of their careers," he continued. "You will expect, as is often the case in the sport, where you've got an elbows-out for a little while, that's happened.

"I think it probably reached a crescendo in Spa. I think both of them realise they've probably not done themselves any good in terms of their reputation or their careers, and Vijay I'm sure has certainly made sure he tells them that from that point of view.

"What we need to do is to regroup, which we have done. They've been individually talked to. They've sat down together. I feel very strongly that they're intelligent and very, very good team players. They've just lost their way a bit - and I don't expect any problems going forwards."