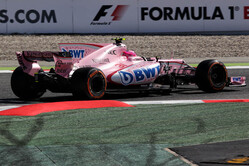 Esteban Ocon: "I really enjoyed the race and I'm happy with our performance. At the same time I'm a little disappointed because I really wanted to finish on the podium today. But you have to be realistic and we didn't have the pace to match Mercedes and Ferrari, so I think sixth place was the maximum we could achieve. At one stage we were racing against Raikkonen and I thought we could keep him behind, but he was just too quick. I also had a good battle with Stroll for most of the race and I had to work hard to keep him behind me. With the strong qualifying yesterday and the sixth place today, it's been a great weekend. I have to say a big thanks to the whole team for all their hard work and for giving me such a competitive car."

Sergio Perez: "First of all, I want to thank my team for the amazing job they did to change the gearbox on my car before the race. It's been a difficult weekend for us, when you consider the struggles on Friday and how missing out on Q3 yesterday made our race much more difficult. Today the car felt good and I was strong in the first stint, despite some damage picked up at turn two, but things got more difficult after the pit-stop. We had a slow stop and I got stuck in traffic: I think I lost a couple of seconds and that's what made the difference between us and Williams. We gave everything to get back to them, but we ran out of laps to pass them. Perhaps with two extra laps I would have made it, but that's racing. Even though I expected a bit more, we still rescued a few points and I am happy with this result."

Robert Fernley: "A successful weekend in Monza with both cars in the points. The car has been competitive across all the sessions and it's a credit to the whole team that we could convert our potential into a solid result. It was fairly clear that a one-stop strategy was the best approach today and both drivers drove strong races. Esteban ran as high as second after the start, but the pace of Mercedes and Ferrari proved too strong and he had to concentrate on fighting off the Williams' pair. Checo ran deep into the race on his supersoft tyres and in the final laps he was closing in on Massa. It was an exciting final lap, but ultimately he had to settle for ninth place. It's great to end the European part of the season on a high note and we begin the Asian fly-away races sitting in a strong fourth place in the championship."