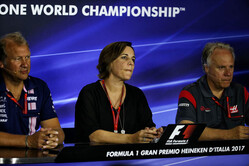 Q: Bob, let's start with you. We've seen the Perez-Ocon situation escalating from a rivalry to something perhaps more damaging. Does the team feel that you've managed it well up to this point - and what can you really realistically do to impose instructions in future situations without favouritism?

Robert Fernley: I didn't think I'd get that question! Our team manages things. The outside judges rather than the inside. From an internal point of view we're working very closely with the drivers. We're very blessed to have two very talented and equally very competitive drivers. They're at different stages of their careers. You will expect, as is often the case in that sport, where you've got an elbows-out for a little while, that's happened. I think it probably reached a crescendo in Spa. I think both of them realise they've probably not done themselves any good in terms of their reputation or their careers, and Vijay I'm sure has certainly made sure he tells them that form that point of view. What we need to do is to regroup, which we have done. They've been individually talked to. They've sat down together. I feel very strongly that they're intelligent and very, very good team players. They've just lost their way a bit - and I don't expect any problems going forwards.

Q: Obviously there's a great opportunity for you this weekend for some big points given that both Red Bulls are going to be starting from the back of the grid. You could be fifth and sixth on Sunday - so you have to execute. Right?
RF: I think the lady next door to me is looking for that! Absolutely. We'll both be fighting. It's a Mercedes track. There's no question it benefits our power unit and we are going to have to optimise that position and we don't want anybody making in-roads on that fourth position. We want to consolidate it and that will require both our drivers to deliver.

Q: Quick final question on this. It's no secret that both of your drivers are on the wishlists of competitor teams for next season - in some cases the same competitor team. How determined are you to retain them both in 2018?
RF: I think from our side we are fully committed to retaining them both and that will be our objective. There's no question of that. But, y'know, driver markets are driver markets and it's quite right and proper that their managers, and in particular Checo's manager, is out looking at other programmes. He's got to keep us on our toes. If he didn't do that, he wouldn't be doing his job, and we've got to make sure that we close that off and retain him for next year and keep the pairing. It's a phenomenally exciting pairing. Might be difficult to control a little bit - but I'd like to have that problem.

Q: Gene, already ahead on points compared to last season with eight races still to go so is it time already to take the next step and what kind of investment does that need to go up to that level?
Gene Haas: Well, I'm not comfortable with the points lead we have because I think in any given race we could drop back a position or two in the Constructors' series because we're all so close. If anything, I feel a little bit on needles because our biggest problem is execution, minimising mistakes, that seems to be our worst (indistinct) ourselves. We've had some component failures we've executed poorly and I think we've left 15 or more points on the table, even at this point. That's really where we need to perform is just running a race team with less mistakes, more consistency and that's what's going to earn us our points. I think both of our drivers are very very capable racers. I think that they're much much better racers than they are at practice and qualifying. I know Kevin has shown the ability to sometimes get two to three positions just at the start of the race so he's an aggressive driver. I think Romain's more reserved, he knows that you have to finish the race to get the points, so I think the combination of these two drivers bodes well for us in the race but we do need to finish the race.

Q: Now the Ferrari chairman, Sergio Marchionne, said he would like a team to help develop Ferrari's junior drivers like Giovanazzi and Leclerc. You seem to have gone the opposite way in driver choices for this year and next, as you've just highlighted. Do you rule out working with Ferrari on juniors in the future?
GH: No, I don't think we rule it out but from a business model it doesn't really make a lot of sense. There's no secret that it costs $60m to put a car on the track for the season and if someone gives you a driver and not just from Ferrari, from anybody, and they're going to pay you five or six million dollars, there's $55m deficit there somewhere, so it doesn't really make sense to want to run let's say a partner or a paid driver for compensation. I think our point of view has always been that we need to obtain points and that's how we generate moving forward and making money, so that's our business model. I think Ferrari respects that and based on that, if there's some mutual agreement that we could come to we probably would be more open to that.

Q: Claire, obviously this season's not gone according to plan and the car just clearly isn't fast enough is the core of it. The 2018 car will be the first obviously under Paddy Lowe's technical stewardship, what's he doing to step things up?
Claire Williams: Yeah, as you would expect someone of Paddy's calibre has a plan and ever since he joined us back in March this year he's been undertaking a full analysis of the team back at the factory but also the race team operations on the ground trackside in order to understand where the weaknesses lie. We've gone through that as a board and now we're looking at how we allocate resources moving forward into 2018 so that we can address those weaknesses. I think a lot of our weaknesses appeared at the midpoint in last year's season and we can't go into another season having the same issues that we've had so we have full trust in Paddy but also we've brought in a number of other senior personnel to work alongside, so Dirk de Beer heads our aerodynamic department now as well, comes from Ferrari this year to us, and some other senior engineers who are hopefully going to turn things around for us. But as I said, we can't have another year like this.

Q: You got a bonus year out of Felipe, is there another year in him or are you casting the net wider for a teammate for Lance Stroll for next year?
CW: Yeah, Felipe has done a fantastic job like you say, it's been a bonus year for us. He very kindly came back and he's really delivered for us. Obviously the past couple of races have been tough for him with his medical issue but we're through that now and we're looking forward to him delivering for the rest of the year and we really just have to wait and see. I think I've made it really clear that the team at the moment are focusing on the Constructors' championship, we need to make sure that we consolidate our P5. I don't think we're going to close the gap to Bob, unfortunately, but there's a lot of teams behind us that would love to overtake us and take that P5 and we can't afford that, so for us the focus really has to be on track performance at the moment rather than diluting that effort with thoughts about driver line-up so there's still eight races to go, there's plenty of time to be thinking about next year.

Q: (Inaudible) Question to everybody: on Thursday, there was the launch of the new Formula Two car and it's pretty similar to a Formula One car. On this occasion, Ross Brawn and Charlie Whiting were saying that the plan for the next years FIA and Formula One is to encourage Formula One teams to work closely with Formula Two teams. Do you think that makes sense from your point of view?
RF: Well, I think historically we've tried to do that anyway. It's not just a case of working closer with the teams. Usually you have some sort of driver link and that's the bit that brings the two together so I don't see any changes to that. Where you can, you support it but to have a direct link between the Formula One team and the Formula Two team is not easy. There are certain people who are doing it very well but all teams can't embrace it because of the costs.

CW: Yeah, I probably echo what Bob says really. Obviously we're all looking at drivers in that championship and if there's ways in which we can work with teams from that perspective then fine but I think from our perspective as a team at the moment we have our own issues that we need to be concentrating our full efforts on rather than diluting that down again with maybe other projects such as working with a Formula Two team.