We have a Plan B and Plan C, says Brown 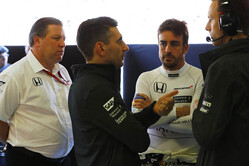 As crunch time rapidly approaches and decisions have to made concerning the futures of both McLaren and Fernando Alonso, team boss Zak Brown insists the Woking outfit has back-up plans should the Spaniard opt to quit.

Though he has denied it, it is claimed that Alonso has told McLaren that if it wishes to retain him it must end its partnership with Honda. At the same time, aware of the money the Japanese manufacturer pumps into its coffers, and (fairly) confident Honda will eventually come good, the Woking team is faced with a dilemma.

Speaking at Monza, while claiming that the team does have alternatives - in terms of drivers - Brown insisted that Alonso has not given McLaren an ultimatum.

"Fernando's not given us any ultimatum, them or us, all he wants is a competitive car," he told reporters. "I'll be spending more time with him this weekend, and his decision is going to be based on whether he thinks we're going to be competitive or not. He's not been engine specific in his desires.

"He hasn't signed with us yet, negotiations are on-going," he continued, "they are going very well, but you've got to have a Plan B and C, in the event that you don't reach an agreement, and we've got those plans."

Asked about the 1.6 litre, 6 cylinder elephant in the room, Brown said: "This is the month we decide, this month is the time we're going to take a decision on our direction for next year.

"It's very complicated," he added, in a masterpiece of understatement, "there's a variety of pieces to the puzzle, some in our control, some not. The best thing for McLaren is to make the best sporting decision possible. The business will follow suit.

"We're here to win," he insisted, "that's what makes us successful, so we're going to take a sporting decision. We can't afford not to be on the podium.

"It's a big decision that has lots of elements to it, and economics are one. Fortunately we have extremely committed shareholders that we can make a sporting decision and deal with the economics. We're not financially challenged, so we can navigate any financial situation.

"We're going to sit down next week with guys that are much smarter on power units than myself and take a view on what we see Honda's plans are, what they have accomplished.

"Whatever we do is going to have an element of risk associated with it, but that's Formula 1," he admitted. "Right now we've got pen to paper on our 2018 chassis, but you can only go so far without knowing what power unit you'll have in the back of it."