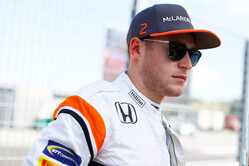 A frustrating day for McLaren Honda at the Belgian Grand Prix. Both drivers made excellent starts - Stoffel moving from P20 to P17 and Fernando from P10 to P7 on lap one. However, despite initial optimism, the pecking order was quickly established, and neither were able to capitalise on their early promise.

The notorious power-hungry nature of the Spa-Francorchamps circuit took its toll, and meant Fernando and Stoffel were left vulnerable to attack on the straights. To compound the issue, Stoffel lost time during his two pit stops due to a sticky front left tyre. On lap 26, Fernando reported a problem with the engine, and the team opted to retire his car as a precaution.

A Safety Car in the latter stages of the race didn't provide any respite for Stoffel's race, and although he was gaining in the closing stages, he was unable to catch the tight pack in front. He still managed to put in a solid performance under the circumstances - starting from 20th and last position on the grid - and finished the race in 14th place.

Fernando Alonso: "In general, it's been a good weekend. We played a good team game in qualifying, we had a great start - taking the outside lane was the right decision - and we were seventh after the first lap. It was fun for the first three or four laps! Then we tried to defend our position, but in the middle of the straights some cars passed us without even activating the DRS.

"For sure, is not easy to race like this, as you cannot have any good wheel-to-wheel battles. It was a difficult afternoon and we were not competitive in race trim. The car was too slow on the straights and it was impossible to have any battles out there, so points were also impossible today.

"Eventually, we had to stop due to an engine issue. The situation is what it is and we need to improve it as soon as we can. I know the team is working day and night improving the car, and we hope we can see the results soon."

Stoffel Vandoorne: "It was a difficult race for us today. We had a good start, but from there on it was a pretty frustrating race. From the position we were starting in too, it was always going to be tricky, especially as I felt that our car was reasonably good and the pace was there to progress, but we were just a sitting duck on the straights. It meant we had no chance to overtake anyone, and no chance to defend from the other guys behind us. It was more or less the maximum we could do today. We got to the flag and that's probably the only positive.

"We always knew it was going to be tough, and today showed that."

Eric Boullier: "Today was a very disappointing day for McLaren Honda, despite the best efforts of our drivers. Both Fernando and Stoffel made excellent starts, and for a few laps we dared to dream of progress, but unfortunately it was short-lived.

"We knew this track would be difficult for us, but after a positive start to the weekend, we were surely hoping for a better on-track performance come race day. Sadly, our package was not up to the job and, as we feared, we were unable to keep up with our nearest competitors when under pressure on the long, arduous and infamous Spa-Francorchamps circuit.

"Fernando gave everything all weekend, and showed his inimitable talent and prowess at the start, rapidly gaining places, which he was ultimately rendered powerless to defend. Stoffel too, started strongly, but was unable to show off his knowledge of his home circuit - and favourite track - and finished the race in 14th, points too far out of reach. Nevertheless, he drove a measured, solid race and did all he could to finish in 14th despite starting from the back, a couple of tricky pit-stops and a car that was unable to provide the performance required to reward the thousands of fans who turned up to show him support at his first home grand prix."

Yusuke Hasegawa: "We thought we had the possibility of scoring some points here in Belgium today, so it was disappointing that we finished the race outside of the top ten.

"After starting brilliantly, Fernando then had a tough race overall. He radioed in with what he thought was a problem with the car, and although there was nothing showing in the data, we decided to stop the car as a precaution.

"Despite starting from the back of the grid, Stoffel had good pace throughout his home race, and drove well with some great overtaking manoeuvres.

"This weekend was definitely a bag of mixed fortunes. We were able to show some decent pace in qualifying, but we still have work to do with our race pace, and we will continue to accelerate our development in order to improve our PU further."