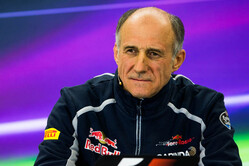 Q: Zak, let's begin with you. Hungary, obviously a strong performance, the best performance of the season so far. How do you feel about the level of that performance that weekend and the steps on the journey back to competitiveness for your team?

Zak Brown: Hungary was definitely a step forward. Good to see both cars get home in the points. Sixth and tenth isn't exactly what gets McLaren too excited but it was definitely forward progress.

Q: Where are you now on the long-term plans in terms of power units. Obviously we've heard all these stories of various steps along the way from winter testing right through to the summer break. Has anything changed? What can you tell us?
ZB: I think like all racing teams, we're working on our 2018 drivers. We obviously announced Stoffel, which was never in doubt that he was going to continue with us, and we're working on our second driver, some two-time World Champion, and making sure we have the most competitive race car for next year.

Q: Hasegawa-san, coming to you, your side of that story. Obviously Hungary, a step forward, your updated engine here, and also where do you feel it's going, the relationship with McLaren?
Yusuke Hasegawa: Of course, in Hungary we are very happy. Actually, we are very relieved we get the points. That is performance we are not satisfied with but it is a minimum level of performance we have to achieve, so we are relieved about that. So, still the matter, we need to update our engine performance definitely to convince McLaren as well and to satisfy us.

Q: And the updated engine this weekend, what can you tell us about that? How much more performance is there in Stoffel's car?
YH: OK, it's actually... we had planned to introduce a spec-4 engine here but we failed. Actually we didn't match to the schedule. So that we have a halfway upgrade. We called it 3.5 and 3.6 but I think we can introduce some decent upgrade here but we don't stop the improvement.

Q: You have Franz next to you this afternoon. Is Toro Rosso still a possible contender for a second supply of engines in 2018? Are those talks still live?
YH: I don't think so. We don't have an official conversation about that. So although Mr Yamamoto visited Dr Marko, because we need to discuss about Super Formula, the Japanese formula series, and we have Pierre Gasly the Red Bull young driver, so that we have some communication with him - but other than that the Formula One engine supply, we didn't have an actual conversation.

Q: Franz, just picking up on that, as far as you're concerned, that was never really something that was in the offing; you're sticking with what you've got: Renault engines going forward.
Franz Tost: No, Hasegawa-san has just answered that there has never an official negotiation or talks between Honda and Toro Rosso.

Q: We spoke to Christian in the first part of this press conference about your Red Bull Young Driver programme - obviously it's been tremendously successful over the years but he was saying there's no real hot prospects. You've got some young drivers in the pipeline but it's just that sometimes there's plenty of good drivers and sometimes there aren't. I just wanted to know what your perspective was on what's been achieved if you like and whether there's still that same enthusiasm on the Red Bull side, when you consider that McLaren, Ferrari, Mercedes have all got some very hot prospects on the threshold of Formula One now?
FT: I think Red Bull is in a fantastic situation because there are four drivers who are able to win races which they've showed in the past: Daniel Ricciardo, Max Verstappen, Carlos Sainz and Daniil Kvyat and there's the reigning Formula Two champion, Pierre Gasly who is in the pipeline, who is also very successful in Japan. That means this infrastructure which Red Bull has built up is so successful and why should they change anything? You should also take into consideration that something can happen at Red Bull Racing - an accident and so on - and they can just take a driver from Toro Rosso and this is why Toro Rosso is educating drivers for Red Bull. Young drivers are coming but it takes another two or three years maybe until we can discuss to bring them into Formula One and I think that Red Bull is really in a fantastic position with the driver line-up.

Q: (Graham Harris - Motorsport Monday, Motorsport Week.com) Franz, Carlos Sainz is going to be spending his fourth year next year in Toro Rosso if we take Christian's comments in Austria that they've activated his contract for next year. This will be the first time that a driver has actually spent a fourth season in the team. Who will be sitting next to him? Have you decided? Will it be Daniil next year as well or would you be evaluating that later in the season?
FT: We will see. As I just mentioned before, Red Bull is in a fantastic situation. Why should they dismiss these highly skilled drivers? Red Bull has financed all the careers so far of Carlos Sainz and now he is ready to win races if he has a proper car so why give him to another team, to an opponent or whatever? And Daniil Kvyat was this year a little bit unlucky because many times we couldn't provide him with a reliable and fast car and I'm convinced that once he gets this car that he will show his talent, because he did it already in the past. He won the GP3 championship before he came to us. He finished on the podium at Red Bull Racing in China and he can race and he has the ability to be successful and as I mentioned before, Pierre Gasly is in the pipelines, which means Red Bull is really in a very strong position and there's no necessity to change something, but we will see. The driver line-up will be decided by Red Bull in the next months.

Q: (Abhishek Takle - Midday) To Zak and Hasegawa-san: firstly, the upgrades that you introduced this weekend, have they delivered as promised, and secondly, it's been reported that Honda has been working with Ilmor and has discovered some good gains on the power unit front. Hasegawa-san, firstly, can you confirm that you're working with Ilmor and Zak, couldn't Ilmor's involvement convince McLaren to stick with Honda for the future?
YH: First of all, about the performance upgrade, it is very difficult to compare the previous engine to this engine because this is a completely different circuit but from the data point of view, we see some good upgrade of the performance here.

ZB: A good question was what do we think about Ilmor. As Hasegawa-san said, it's really up to Honda to discuss what their activities are. All I would say is that Ilmor as an organisation that has worked with McLaren in the past and is very successful and very good at what they do.