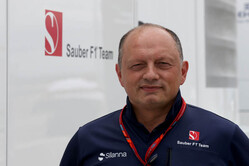 On April 30, after years partnered with Ferrari, Sauber revealed that it was to join forces with Honda.

A fortnight into the job, Vasseur announced that the agreement with Honda was over and that the Hinwil outfit would remain a customer of Ferrari, albeit with current (2018) spec engines.

Talking to the official F1 site, the Frenchman explained the reasoning behind that decision.

"We analysed where we are - we did analysis of each department - and the first decision was to stick with the partnership with Ferrari," he said. "That was probably the most important decision, as it will be a mid-term partnership. We can't change engines permanently from one year to the other. We will stay with Ferrari until the end of the period, that was a crucial decision.

"Leaving aside the current issues that Honda has with reliability or performance, as I know that they will come back at some point, the biggest concern for us was that we could not secure the responsibility of the gearbox," he admitted.

"We don't have the resources internally to build our own gearbox, so we knew that we had to deal with someone.

"With Honda we would have to deal with McLaren, but I was not so confident that McLaren would continue with Honda, so it would have created a strange situation: asking McLaren to provide the gearbox for a Honda engine when McLaren could be running another engine.

"With this kind of scenario I was absolutely not confident. So the 'reprocessing' of the Honda deal was one of the biggest issues.

"Sauber had already started the design of the 2018 car before I took the decision and that was the reason for the rush," he revealed, "so as not to throw good money at abandoned projects. The design was already in progress, then there was the factory shutdown, so we had to take the decision right away."