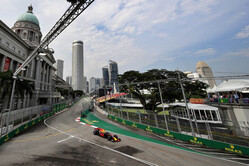 Ahead of today's opening session the air temperature is 29 degrees C, while the track temperature is 33 degrees. There was some rain earlier but you'd never know it now... the humid conditions having quickly dried the track.

There are two reserve drivers in action this morning, Antonio Giovinazzi at Haas and Sean Gelael in Carlos Sainz' Toro Rosso.

Talking of which, Toro Rosso and Sainz have been the focus of feverish speculation in recent days, and it is understood that by close of play all will be revealed.

Much has been made of the fact that Mercedes, and in particular Lewis Hamilton, has often struggled here - though Nico Rosberg won last year - but interestingly, though favoured, Ferrari too is adopting the underdog role heading into the weekend.

On the other hand, Red Bull, which has troubles enough on its plate, could well be the dark horse.

The lights go green and Wehrlein is first out, the German one of several drivers sporting a special glittery helmet this weekend. In no time he joined by his various rivals as they explore the Marina Bay track.

Six minutes into the session Perez heads out, leaving the Mercedes duo as the only spoil sports.

Bottas finally heads out... joined, a minute or so later by his teammate.

Despite being the last out to play, the Mercedes duo, unlike their rivals don't head for their garages after their installation lap but instead stay out, Bottas posting the first tome of the day (48.770) and Hamilton the second (49.498).

Bottas' improvement to 46.873 is the cue for some of his rivals to head out and join in the fun.

"Track temperature currently 34 degrees: cool for Singapore," admits Pirelli. "There was some overnight rain, so a couple of damp patches on track."

Indeed, as Hamilton reports "tricky conditions", teammate Bottas has a big, big slide at the bridge as if to prove him right.

The top of the shark fin on the Force India now features a 'blade' on either side, which some are already comparing to a hedge-trimmer.

Following a close encounter with the wall, which he does well to control, Hulkenberg is advised to make some adjustments and told that it is urgent.

Perez goes third, ahead of Massa and Vandoorne, as Hulkenberg improves with a 46.486 to split the Mercedes duo. Bottas (45.307) remains quickest.

The camera cuts to Carlos 'no mates' on the Toro Rosso pit-wall, the Spaniard sitting all alone, thereby reinforcing the speculation that he's Renault bound.

Verstappen improves to 43.278, the Dutch driver, like most of his rivals, on the ultrasoft. Indeed, of the main runners only the Mercedes duo are on supersofts.

A spin for Grosjean at T16 as Verstappen enjoys a very bumpy ride over the kerbs, the youngster subsequently admitting that he "touched the Astroturf".

Stroll reports a problem with his engine and subsequently pits.

Having previously reported a brake issue, work in now ongoing on the front brake drums on Hulkenberg's car.

Now on the ultras, Bottas goes quickest in S1. Despite PBs in the final sectors, the Finn can only manage second (43.434).

Hamilton, also on the ultras, goes quickest in S1, just like his teammate, but loses pace in S2 finally crossing the line at 42.904 to take the top spot but not looking entirely comfortable.

With their rivals handing back their extra set of tyres, the Silver Arrows have the track to themselves.

As Bottas has a rear lock-up, the camera picks up Vandoorne having a bit of a struggle getting out of his McLaren which is running the Halo.

Hamilton is told to pit, advised that his front calipers are "too hot".

"I have no power," complains Alonso. Given a number of instructions aimed at solving what is a harvesting issue, the Spaniard replies: "Oh my god, really?"

Giovinazzi has the mother of tank slappers, the Italian doing well to keep the rear end of his car out of the barriers.

Purple remains the order of the day, only Grosjean, Giovinazzi and Gelael running the supers.

Asked if he wants to do another lap, Alonso responds: "No, please no."

As is ever the case, the final phase of the session sees the drivers concentrate on long runs, even though - because it is taking place earlier than any other session - FP1 is pretty much unrepresentative of what we can expect tomorrow and Sunday.

Williams confirms that it is changing the gearbox on Stroll's car.

Bottas complains that his rear end is travelling around too much.

The camera picks up on the Red Bull which is smothered in flo-vis, the bargeboards given a particularly eerie look.

Following a lock-up, Hamilton heads up the escape road at T14.

Another minor excursion for Grosjean, this time at T2, the Frenchman momentarily bringing out the yellows.

Interestingly, neither Haas driver has run the ultras in this session.

Speaking of which, another off for Grosjean, this time at T18, meaning more yellows.

"Loud and clear," replies Hamilton when contacted on the "back up radio".