Is the FIA trying to tell us something? 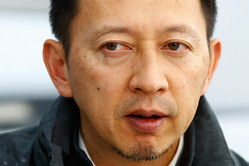 As we await official confirmation on all those moves, the FIA drops a none too subtle hint.

In the wake of Sebastian Vettel's moment of madness in Azerbaijan, the FIA's head of communications, Matteo Bonciani, sensing the media hysteria in the situation as the gloves finally came off in the 2017 title fight, ensured the pair were centre stage at the opening press conference at the next race, Austria.

Likewise, he ensured Esteban Ocon and Sergio Perez were paired in the spotlight at Monza following their controversial clashes in Belgium a week earlier.

With an eye on a number of rumoured deals that look set to be announced - or confirmed - over the Singapore Grand Prix weekend, are we to assume that Matteo is up to his usual fun and games in terms of the line-ups this weekend?

Friday's opening press conference sees Cyril Abiteboul joined by Zak Brown and Otmar Szafnauer, at a time the Woking outfit is said to be switching from Honda to Renault power.

Sadly, while Carlos Sainz doesn't make an appearance on Thursday, Fernando Alonso does, along with Lewis Hamilton and Jolyon Palmer, who, if the rumours are true, could be making his last appearance of the year.

Good to see that someone at the FIA not only has a sense of occasion but a sense of humour also, for if the announcements haven't been made before 22:15 (local time) on Friday night we're likely to hear it all direct from the various horse's mouths.