Ricciardo: Singapore not our last hope of a 2017 win 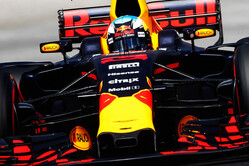 Having, against all odds, scored 27 points at two circuits where he was expecting to get soundly trashed, it comes as no surprise that Daniel Ricciardo is expecting a strong race in Singapore next weekend.

The street circuit is a great leveller and its low demands on the power unit mean that the Renault-powered Red Bulls might have one of their best chances of victory this season.

However, looking ahead to the race, Ricciardo insists there may well be other chances to shine in the remaining seven races.

"I believe Singapore won't be our only chance but is one of our best chances of a win in the second half of the season," he says.

"I've started second and finished second at this track in the last two years, with fastest lap both times," he adds, "so my aim this year is definitely to start on pole and try to go one better in the race."

"The race has been a strong one for us in the past," adds teammate Max Verstappen, "and I think we should be able to challenge for a podium this year."

Indeed, with an eye on its chances on the Singapore track, but aware that overtaking is difficult, the Austrian team took numerous grid penalties in Italy in order to have the various components in its pool.