Verstappen would prefer engines to explode 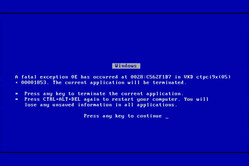 Speaking to Dutch TV show Peptalk, Max Verstappen has admitted that he would prefer to see his engine spectacularly explode, sending out the message loud and clear, as opposed to simply dying the death.

Frustration following his Spa retirement, his third engine-related retirement of the season, was compounded when, on returning to the garage, his engine eventually fired up.

"Because we blew up a few engines at the beginning of the season, they have built a kind of safety mode," he revealed. "But at that moment, when the engine goes into that, it doesn't run any more. So when the car came back, they removed the plug, put it back in again and the engine worked.

"They want to play safe and not to blow the engine," he continued, "but I prefer that (it blows) than it shuts down the engine and it runs again at the next restart."

Asked about how the failure has affected his relationship with his team, he said: "I've spoken with Helmut again today and told him that I'm not happy... the fun fades away. You go on holiday, charge yourself after a kind of terrible season and then you arrive at Spa and it goes wrong."

"You sign a deal with Red Bull and you want a winning package," he insisted, "and we don't have that at the moment. I've let them know I'm not happy, just like after the previous DNF, but it's only getting worse, of course.

"I know it isn't coming from Red Bull, but in the end it's the entire package you are depending on."

Asked whether further failures could lead to him walking out of the team, ironic when one considers the endless threats from Red Bull, he said: "No, that's not possible.

"The problem with F1 is that the differences are too big," he continued. "We can't do much at the moment. If you would win everywhere, it's fine to go from Toro Rosso to Red Bull. Everything improves, but in the end you are behind and there isn't much progress within the year. That's not nice."