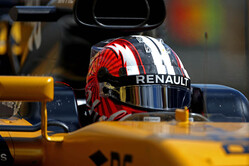 Renault Sport Formula One Team drivers Nico Hulkenberg and Jolyon Palmer both qualified in the top ten for the Pirelli Belgian Grand Prix, the second time this season that both cars made it into Q3. Nico set the seventh-fastest time, a 1min 44.982secs. Jolyon Palmer had looked poised for a similar performance, after setting the P7 time in both FP3 and Q2, however a gearbox issue prevented him from setting a time in Q3, meaning he was classified P10.

Nico Hulkenberg: "I'm very pleased with qualifying as I haven't been able to get the set-up exactly where I wanted it, yet I could still get a P7 time when it mattered. We were still working on set-up today as I haven't been able to find that sweet spot where everything's working at its best. I still don't think we found the best solution, yet I was very positively surprised that we could squeeze a P7 out of it. It's a good effort from the team; tomorrow's going to be a full race. It'll be head down and pedal hard."

Jolyon Palmer: "I've been in a really good place with the RS17 all weekend, easily the best all year. I've had strong confidence in the car, it's felt really well balanced and we haven't had to make many changes, so this bodes well for the future. We had a gearbox problem in Q3, which came after a couple of issues with a clutch sensor, so despite all that it's a positive that we made it into the top ten for qualifying. Without the Q3 issue, P7 was definitely on the cards with the pace we'd shown. I'm hoping for points tomorrow."

How was the overall performance for the team?
Alan Permane, Sporting Director: The team's overall performance was very good, for the third race weekend in a row we have had the fourth quickest car and this bodes well for the remainder of the season. Jolyon was happy with his car from the first laps of the weekend and although Nico has struggled a little more with an inconsistent balance, he got the most out of it in qualifying.

Nico struggled a little bit more than Jo with his car balance. He wasn't as comfortable, sometimes needing adjustments with a little too much understeer and sometimes lacking rear end. At the end of the day he was able to extract the most and get in a good place for tomorrow's race.

What was the issue with Jolyon's car?
AP: We are still investigating what went wrong with the gearbox. It's a real shame for Jolyon, without this incident he could have started from a very comfortable P7. He's had a very good, very straightforward and competitive weekend and it's truly unfortunate he wasn't able to make the most of his potential today, through no fault of his own.

What are the considerations for tomorrow's race?
AP: After yesterday's rain and the threat of a repeat today, the forecast looks good. However, as ever in Spa-Francorchamps, we'll keep a close eye on the radar.