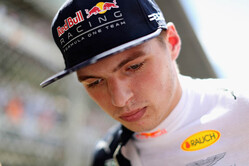 There was almost an air of inevitability about it. In Barcelona, in front of thousands of his adoring fans, he was taken out at the first corner following an over ambitious move by Valtteri Bottas.

Consequently, at what was effectively his home race, in front of many tens of thousands of fans, all decked out in their national colours, it seemed pre-determined to end in tears. And so it did.

Just 7 laps into the race, Verstappen slowed through La Source, his head bobbing as he tried to urge his car forward.

As he crawled down the hill to Eau Rouge, as other drivers passed, his head was now moving from side to side as realisation set in.

Finally, as he headed up the hill, he admitted defeat. "On no," he sighed, "not again".

The retirement means that of the 723 laps that constitute the season thus far, the Red Bull star has completed just 405 (56%), little wonder he compares his plight to that of Fernando Alonso.

"It's unbelievable," he told reporters, "like I said on the radio, I just can't believe that those things happen, now 50 per cent of the races ended in retirement.

"In the beginning, you say maybe it's just bad luck or whatever," he continued, "but I'm actually competing against Fernando in terms of retirements. It's unbelievable, I'm not happy at all.

"I am very disappointed for retiring and for the fans who buy expensive tickets to watch and I retire after eight laps," he admitted.

Asked how the latest set-back will impact his plans for the future, he said: "To be honest, I'm not even thinking about that, we just need to solve it within the team, because for a top team these things can't happen.

"I'm not too worried about the future, what's happening next year," he insisted, "I just want to finish races and have good results. We worked very hard all weekend, and then again you just retire.

"The results are not happening, so you don't care about next year or the year after at this time. We need to talk about it; at the moment I am not a happy person and I look forward to going home."