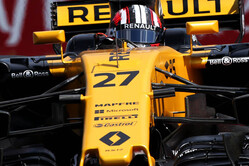 Renault Sport Formula One Team equalled its best result for the third time this season as Nico Hulkenberg finished in sixth position at the Pirelli Belgian Grand Prix. Both drivers gained positions in the race. Nico started from seventh and executed a strong race to gain one position and claim eight points. The team is now one point shy of seventh in the Constructors' Championship. After a promising start to the weekend, Jolyon Palmer had a gearbox issue in qualifying which forced a gearbox change and resulted in a five-place grid penalty for the Brit. He started the race from P14 - due to a competitor also having a grid penalty - and gained one position to finish P13.

Nico Hulkenberg: "It was a solid day; I'm happy and pleasantly surprised. I had a poor start but was able to rectify it at the first corner with a move down the inside to have a great run on Checo through Eau Rouge. The car felt better than yesterday and we were the fourth quickest team out there again which allowed us to finish in the top six. I had some great fighting with Fernando. It was pretty hairy getting three abreast with him and Esteban. Fernando was making a move with DRS and a big tow, then Esteban had a massive overshoot so for a moment I thought 'oh gosh, it's not going to end well,' but fortunately it was great racing and I'm sure great to watch from the outside. I've definitely got good confidence heading to Monza."

Jolyon Palmer: "I think the race could have gone better; we knew that taking a penalty would mean starting on used tyres with everyone around me on fresh sets and that was always going to put us on the back-foot. Despite that, I had a decent start and the car was much better once we changed tyres. It was just a case of being stuck in traffic for much of the race. I had some good fights though, they were fun, but it's a shame not to have anything to show for it. Had we started seventh, points would have definitely been achievable today."

Cyril Abiteboul, Managing Director: "Overall the team had a good race, making a return to the points, where it belongs, as fourth strongest in both qualifying and on race day. Nico equalled his season-best with sixth and despite a difficult first lap, he was able to come back strong with a very solid race strategy that was perfectly executed. Jolyon's results were disappointing for him and for the team. The five-place grid penalty and the results today do not reflect his strong start to the weekend. We will investigate further to see what happened with the difference in pace from Saturday to Sunday.

!I want to mention Red Bull Racing. Their race was one of contrasts, on one side Daniel Ricciardo showed solid pace for another podium but on the other side Max Verstappen was forced to retire. An electronic systems issue seems to be at the heart of this problem. I personally apologise to Red Bull Racing and more specifically to Max and his many fans who are as disappointed as we are. We will work closely with RBR to define a course of action and a roadmap to eradicate issues such as this one which meant they couldn't harness their package's potential today."