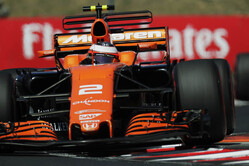 The tight, twisty nature of the Singapore circuit is why Red Bull opted to allow both its drivers to take grid penalties at Monza, knowing that overtaking on the Marina Bay track is nigh impossible.

However, even before he arrives in the city-state, poor old Stoffel Vandoorne is looking down the barrel of another raft of penalties.

Having suffered two MGU-K failures over the Italian Grand Prix weekend, it was hoped that the Belgian's engine might be repaired without the need for further components, however, as the team heads out east it is still waiting on confirmation from Honda.

"We've worked hard to try to avoid incurring any penalties which could halt our progress, and we hope that following Stoffel's retirement in Monza we won't have to use any new power unit elements," says team boss Eric Boullier, "although this is yet to be officially confirmed.

"Singapore is one of the best chances of the year in terms of matching our package to the characteristics of this gruelling street circuit," he adds, the only other track where this was possible being the Hungaroring, where both drivers finished in the points.

"In stark contrast to Monza, with so many tight, slow corners, the Marina Bay Street Circuit is less reliant on outright power and plays more to our strengths as we saw at the Hungarian Grand Prix earlier this season," said Honda's Yusuke Hasegawa.

"The car's overall balance between power unit and chassis will be the key to a good weekend, so our engineers are hard at work preparing the ideal set-up. Hopefully we can provide the drivers with a good package so they can be in the hunt for much-needed points."