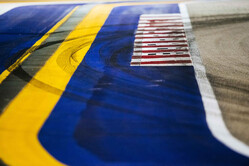 A number of changes have been made to the Marina Bay Circuit ahead of this year's Grand Prix.

The track has been resurfaced around Turns 1 and 2, while resurfacing has also taken place on a 100m section after Turn 5, some areas between Turns 12 and 13 and a section around Turns 15, 16 and 17.

The pit wall has been moved away from the garages by 275mm and the fast lane markings moved by the same amount to ensure cars in the fast lane are further from the working lane.

The first DRS detection point is at the exit of Turn Four and the first activation point is 48m after Turn Five.

Tyre compounds are soft, supersoft and ultrasoft, as in 2016 when Nico Rosberg won using a two-stop strategy, starting on the ultrasofts before stopping on laps 16 and 33 for softs.