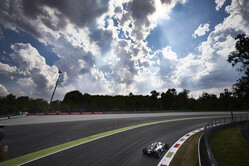 In an attempt to prevent drivers exceeding track limits, a kerb is to be laid at Parabolica exit.

As ever, in seeking every possible extra bit of track that might gain them an advantage, drivers have been running wide when exiting the Parabolica and heading on to the main pit straight.

In their infinite wisdom, over the years the organisers, no doubt acting on the instructions of the FIA, have moved the original gravel trap - which prevented such naughtiness - further and further back and replaced it with tarmac and a white line intended to show the official limits of the track.

With a number of drivers taking advantage yesterday, the matter was raised at the driver briefing and as a result, overnight a ten metre strip of yellow kerbing was laid around a metre and a half behind the white line at the corner's exit.