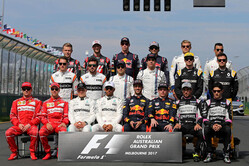 Though a number of driver contracts come to an end this year, even more end in 2018, not least Lewis Hamilton's current deal.

It is this uncertainly over the driver market beyond 2018 that is causing Mercedes to delay renewing Valtteri Bottas' contract, even though, speaking at Silverstone Wolff admitted keeping the Finn on-board is a "no brainer".

However, looking at the longer term...

"I would just like to get the puzzle together," admitted the Austrian, according to Autosport. "It's not only about 2018, it's about looking forward, and what happens in 2019 and 2020, the risk and opportunities.

"That's why after Budapest, and hopefully a good race again, I'm going to contemplate on a beach about what's right and wrong for the team," he added.

Of course, Wolff's dilemma is hardly helped by the cryptic signals sent out by Lewis Hamilton at the weekend when the Briton hinted he could possibly quit… or maybe not.

At Red Bull, Christian Horner believes Sebastian Vettel holds the key to the driver market... certainly as far as rival teams are concerned.

"I guess Sebastian probably holds the key to the driver market at the moment," he told reporters at the weekend. "But certainly within Red Bull there will be no changes.

"They are totally locked in," he continued, referring to Daniel Ricciardo and Max Verstappen, "and there is no price that would be high enough for those two."

That said, Ricciardo is one of the drivers out of contract in 2019, a fact Horner is clearly aware of.

"2019 is still a long way away," he said. "Daniel will have completed the fifth year of his contract with us, and I am sure we will start the talks with Daniel a little bit closer to the time for '19 and onwards."