Horner: Sainz free to go... at the right price 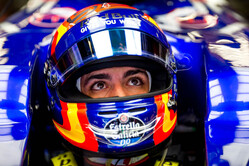 While the media speculation over Carlos Sainz' future that dominated the Spielberg weekend had died down somewhat by the time the circus had pitched tent at Silverstone, some still persisted, with sections of the German press claiming the Spaniard is to replace Jolyon Palmer at Renault in the coming weeks.

With various members of the Red Bull family, including Franz Tost, Helmut Marko and Christian Horner making their feelings quite clear in Austria, insisting that the Spaniard has a contract and that he should be grateful to Red Bull for funding his career and giving him his F1 break, by the end of a British Grand Prix which witnessed another DNF for the youngster, attitudes appeared to have softened... just a little.

"Carlos has a contract with Red Bull Racing and there are two years left on that contract," Horner told reporters. "We value him as an asset and an asset has a value. So if there was a desire for another team to have him or for him to go anywhere else, something that has a value has to have a price attached to it."

With the Renault rumour in mind, Horner, when asked if any such bids had been received, gave a resounding "No!"

"If someone is prepared to make an offer of course we'd consider it," he added. "But it would have to have a significant value attached to it because we have invested in Carlos significantly. We've taken him from Formula BMW to F1, and you are not just going to give an asset like that away."